Newark Liberty International Airport currently appears within the world's top 30 busiest air facilities and boasts a lengthy history, dating all the way back to 1928. This airport became the earliest commercial airline terminal in the whole of North America, following its official dedication ceremony by aviation pioneer Amelia Earhart. Today, just over 600,000 passengers come here every week, meaning that it is always busy, particularly during the peak holiday seasons. 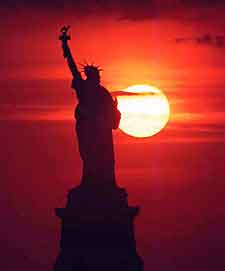 Newark Liberty International Airport is an important transport hub based in New Jersey, between Elizabeth and Newark, and is located approximately 26 km / 16 km to the southwest of New York.

Newark Airport comes with three separate passenger terminals, with the majority of the ticket desks being located on the top floors. Each of the terminals is subdivided into a series of three concourses (A1, A2, A3 / B1, B2, B3 / C1, C2, C3). United Airlines is the principal airline operating here, serving more than 100 destinations around the world.

Newark Airport has good connections to the main road network and is located close to Highway NY-78 (from Manhattan via the Holland Tunnel) and Interstate I-95 in New Jersey. Driving between most destinations is usually straightforward, with good signposting being present. However, only the most confident of drivers should consider driving through the streets of downtown Manhattan, with the traffic being chaotic at the best of times, and completely gridlocked during the daily rush hours.

Many business and leisure travelers who do not wish to drive themselves find that they benefit from using a reliable private Newark car service to transport them safely into New York city.

Operated by NJ Transit Bus Lines, public buses depart every 20 to 30 minutes and run to the nearby Newark Penn Station and the Port Authority Bus Terminal, where there are good connections throughout New York. There are also a number of small companies providing shuttle buses and shared-ride vans onsite, such as Airlink New York, All County Express, ETS Air Shuttle and Super Shuttle Manhattan. Popular destinations include the Bronx, Brooklyn, Long Island, Queens and Staten Island.

Iconic yellow cabs are readily available at Newark Airport and provide an easy, albeit expensive, way to travel to destinations all around the states of New York and New Jersey, such as Edison, Hackensack, Hoboken, Jersey City, New Brunswick, Teterboro and Union City. If using taxis during rush hours (Monday to Friday - 06:00 to 09:00 and 16:00 to 19:00, Saturday and Sunday - 12:00 to 20:00) then do be aware that additional surcharges are usually applicable.

Newark Airport has good connections to Manhattan's Penn Station and trains operate 24 hours a day, serving downtown Manhattan and 33rd Street in the city. There are up to three trains every hour and by rail, the journey into the city center takes around one hour.