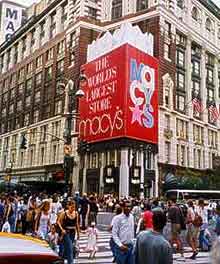 New York is without doubt a major center for shopping in America and the numerous districts provide a shopper's paradise. Whether you are looking for fashion, antiques, furniture, jewelry or home accessories, rest assured that New York will provide you with a huge choice.

Most shops in New York are open seven days a week and public transport is never far away, so shopping in different areas is both quick and easy, although many shops are within walking distance of each other.

New York is an absolute Mecca for shopping and is filled with many world-famous shops and shopping districts. Most locals and visitors enjoy shopping and you can buy almost anything you can imagine when shopping in the Big Apple.


Avenue of the Americas

Situated between 18th and 23rd streets in New York, the Avenue of Americas is lined with large superstores selling everything imaginable. There are usually plenty of bargains to be found when shopping at TJ Maxx, Filene's Basement and many other stores in this shopping district. Also look out for Goodman's Treasures, selling an eclectic collection of home furnishings, and also Barnes and Noble, which is one of the best book stores in the city.

Lower Fifth Avenue is located between 14th and 23rd Streets in New York and is almost like an enormous shopping mall. The district is crammed full with many top fashion shops, including Banana Republic and Gap, and also designer discount stores Daffy's and Intermix. Lower Fifth Avenue is an excellent place to shop for cutting edge fashion, whatever your budget. There are also many interesting shops to be found along the side streets of Fifth Avenue.

Canal Street is a popular shopping district and is full of irresistible, fake merchandise, including copies of brands such as Gucci, Chanel, Hermes and many more. There are also many shops selling jewelry, discount electrical goods and some excellent art supplies.

Elizabeth Street is the center of the chic New Nolita neighborhood in New York and is situated between Spring and Houston Streets. Lined with small shops, restaurants and bars, Elizabeth Street is home to many independent and original city shops.

Full of shops for tourists and many theme restaurants, 57th Street in New York is a busy shopping district. There are also numerous top fashion boutiques along 57th Street and these include Chanel, Coach, Laura Ashley and Prada, to name but a few.

Madison Avenue is a paradise for shopping in New York and is full of stylish, expensive shops. For high fashion, top designer shops include Armani, Valentino and Versace. Madison Avenue is also home to the famous store Barneys, which is where many fashion conscience New Yorkers shop.

For some of the trendiest shopping in New York, visit the interesting SoHo district. Here you will find galleries, boutiques and chain stores, selling items such as clothing, house wares, jewelry, art and health food, in stylish and enticing surroundings.

Upper Fifth Avenue is situated between Central Park and the Rockefeller Central and is a completely different shopping district to Lower Fifth Avenue. Full of some of the top stores in New York, such as Bendel's, Bergdorfs, Sak's and Tiffany's, there is plenty to choose from when shopping in this swanky city neighborhood.

Here are some of the most popular shops and stores in the city:

Bloomingdales is situated along 59th Street and is where many of the affluent residents of nearby Upper East Side come to shop. Full of clothing, furniture, fabrics, home accessories and much more, Bloomingdale's is an enormous department store in New York and around 50,000 people visit Bloomingdale's every day.

Famous amongst shoppers in the city, Macys is located on Herald Square and is reputed to be the largest store in the world. This massive department store sells everything that you could possibly require when shopping in New York.

Located on Fifth Avenue, Tiffany's is a world famous jewelers and has three stories full of precious jewels, silver accessories, designer watches, stationery items and even some porcelain. This exclusive store is well-known for its Art Noveau jewelry and lamps and items may be expensive, but quality is assued and Tiffany's is well worth a visit.