New York is divided up into numerous, interesting districts and neighborhoods, full of many excellent attractions, shops, restaurants and viewpoints.

What most people think as of as being New York is actually Manhattan, which is a long, narrow strip squeezed between two rivers. 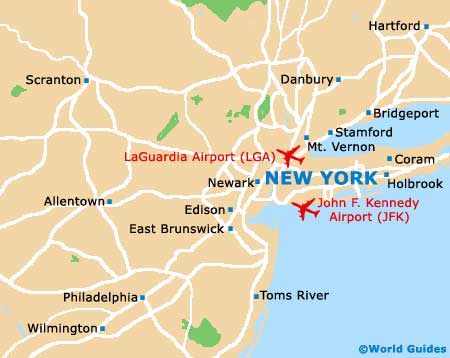 The island of Manhattan is full of everything that defines New York, such as the towering skyscrapers, famous landmarks and many major shopping areas. Manhattan is the center of city life and has many different areas and neighborhoods. The main neighborhoods and districts in the city include the following areas of the Manhattan:

Situated at the southern end of Manhattan, the Financial District is full of high-rise towers. This is the oldest part of the city, where the first settlements were established and has an exciting and vibrant atmosphere. The New York Stock Exchange is located in the Financial District, together with many of the city's major corporations and important businesses. 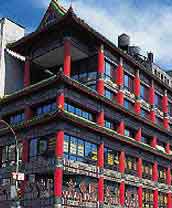 Chinatown is full of history, busy streets, oriental architecture, market stalls and a large number of popular Chinese, Thai, Vietnamese and Korean restaurants. The lively district of Chinatown is one of the longest-established ethnic areas in the entire state.

Little Italy is a small and interesting district, full of character. Traditional Italian cuisine and cappuccino's are widely available in Little Italy and there are many tables on the sidewalks of this district, where you can sit and watch the world go by.

The Lower East Side of Manhattan in New York juts out towards the East River. This was once the place where new immigrants to the city arrived and is now home to numerous street markets, discount shops and much more besides.

The compact districts of SoHo and TriBeCa are trendy locations that were transformed from derelict industrial sites. These are prime examples of New York renovations at their best.

With a huge number of bars, cafés, music venues, stylish houses and some excellent architecture, Greenwich Village in New York is situated in Lower Manhattan. Greenwich Village has a large amount of character and some interesting narrow streets.

Across from Broadway, the East Village is a contrast to nearby Greenwich Village and its many clubs are bars are less polished. With a number of unusual shops and some offbeat street cafés, East Village is a fairly inexpensive area of the city.

New York's Upper East Side districts is one of the most wealthy neighborhoods in the city. With many designer clothes stores, exclusive boutiques, gourmet restaurants and up-market art galleries, Upper East Side is a relatively pricey spot.

Close to Central Park, the Upper West Side region of Manhattan has several major tourist attractions, including the Lincoln center, the American Museum of Natural History and the impressive Cathedral of St. John the Divine. There are also many tall apartment blocks offering luxury accommodation and much coveted city addresses.

Dating back to the early 17th century, Harlem has a wealth of important New York history. Harlem has played a major role in the history and culture of black America and more recently has suffered from poverty. After some renovation and economic success, Harlem is undergoing a positive transformation.

Some of the most important outer boroughs of the city include:

Home to the popular Brooklyn Museum and the lively Brooklyn Heights neighborhood, the borough of Brooklyn merits a day-trip excursion from Manhattan. Other Brooklyn highlights include Coney Island, with some historic fairground rides, the lively Russian community and nearby Brighton Beach.

Part of the attraction of visiting this iconic island is the scenic trip over on the Staten Island ferry. This is a large island with numerous attractions and interesting museums.

The Bronx is a largely suburban area and the main highlight is without doubt the large, Bronx zoo, now also referred to as the International Wildlife Conservation Park. This is a popular family attraction in both the Bronx district and the city of New York as a whole.

Queens is a spreading suburban area, similar in appearance to the Bronx. This neighborhood features some thriving ethnic communities and also some historic remnants of the city's early film industry.