A city like no other, New York is central to America's tourism industry and certainly contains some of the most famous tourist attractions in existence, such as the Statue of Liberty. Particularly popular destinations within the city include Times Square, which resides within the heart of Manhattan, next to Seventh Avenue and Broadway, and is well-known for its distinctive illuminated billboards.

Founded in 1939, the Rockefeller Center is another New York tourist attraction of great note and covers a large area between both Fifth Avenue and Sixth Avenue, and is now regarded as a National Historic Landmark. The Rockefeller Center is where you will find the Radio City Music Hall and has made an appearance in countless American movies. You may also like to take a trip onboard a Staten Island Ferry, or maybe catch a show at the historic Apollo Theater. 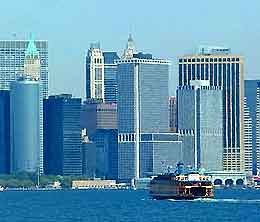 Address: Whitehall Ferry Terminal, New York City, NY, 10004, USA
Tel: +1 718 390 5253
The Staten Island Ferry provides one of the best ways to see some of the city's most impressive tourist attractions, such as the Statue of Liberty, Brooklyn Bridge and the Manhattan Skyline - free of charge. The ferry tour lasts around 25 minutes and departs from the Financial District every 30 minutes.

Address: 253 West 125th Street, New York City, NY, 10027, USA
Tel: +1 212 531 5300
The Apollo Theater is situated in the Harlem district of the city. Opened in 1913, the theater is full of history, character and charm. In the past, many famous stars have performed at this important entertainment venue, including the likes of Ella Fitzgerald and Billie Holiday. There are regular nightly musical performance at the Apollo Theater, which has recently been restored.

Address: 5th Avenue, New York City, NY, 10018, USA
Tel: +1 212 621 0626
The Public Library, in the heart of Midtown, is a significant tourist attraction in its own right. Highlights include stunning architecture, the famous third floor reading room, an intricate carved oak ceiling, a pair of lions by the majestic stairway and the grand, white marble Astor Hall. The library is home to several million books and manuscripts, most of which can be located in just a matter of minutes.
Open hours: Monday and Thursday to Saturday - 10:00 to 18:00, Tuesday and Wednesday - 11:00 to 19:30 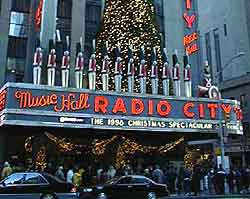 Address: 1260 Avenue of the Americas, New York City, NY, 10020, USA
Tel: +1 212 247 4777
Radio City Music Hall is situated in Midtown New York and is a popular tourist attraction in the city. Over the years many top celebrities have performed here and concerts sell out quickly. The famous Christmas pageant began in 1933 and is now so popular that the tickets can become quite expensive. You are able to view the interior by taking a tour of the Radio City Music Hall. Tours leave every 30 minutes on weekdays from 10:00 to 17:00 and on Sundays, from 11:00 to 17:00 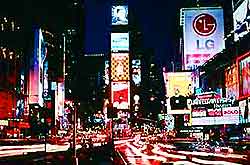 Address: 1560 Broadway, New York City, NY, 10036, USA
Times Square is named after the New York Times, who have offices that have been situated in this busy city square for almost 100 years. Situated in the heart of the Theater District, this is a popular area for tourists visiting the city and is lined with shops, cinemas and numerous excellent restaurants. Times Square is best known for being filled with enormous neon lights and large signs.