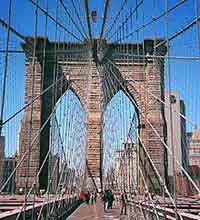 When it comes to exploring New York, there are so many landmarks that are worth mentioning, although a number of the best-known buildings and skyscrapers do seem to date from the 1920s and the following Great Depression era. One such epic tower is the Chrysler Building, which is based within the Turtle Bay area and stands on the eastern side of Manhattan, being famed for its classical Art Deco ornamentation on its roof, strongly influenced by the Chrysler motorcars of the period.

An iconic landmark famed for its King Kong heritage, the towering Empire State Building also dates back to that period in history and was once the world's tallest building. Other immediately recognisable sights often associated with the city include the Brooklyn Bridge, the George Washington Bridge and Battery Park. The story of Carnegie Hall is certainly an interesting one. When the New York Philharmonic symphony orchestra decided to relocate from here to the Avery Fisher Hall, the future of Carnegie Hall became uncertain and it was almost demolished. However, the city stepped in and purchased it for $5 million, creating a non-profit organization to run this leading concert venue, which today ranks as one of the world's best.

Address: City Hall Park, Manhattan, New York City, NY, 11201, USA
Ranking amongst the most historic suspension bridges in North America, the six-lane Brooklyn Bridge is certainly one of the most attractive, with its simple timeless appearance and Gothic towers remaining elegant in today's modern times. The bridge was the earliest ever steel suspension bridge to be constructed and crosses the East River, with a span of just under 1,600 feet / 488 meters. Completed in 1883 and built to connect the boroughs of Brooklyn and Manhattan, this was the longest suspension bridge that the world had ever seen. In 1972, it became listed as a National Historic Civil Engineering Landmark, with the 1980s seeing much-needed restoration work being carried out, and in 2009, over $700 million was spent upgrading the approaches and repainting the entire structure. Tourists wishing to take a closer look at the arrangement of the literally thousands of cables may like to take a stroll along the pedestrian walkway. 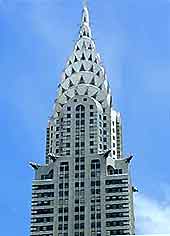 Address: 405 Lexington Avenue / East 42nd Street, New York City, NY, 10017, USA
Tel: +1 212 682 3070
There is no denying that the Chrysler Building is a beautiful skyscraper and its stylish curved roof crown has influenced architecture throughout the world. The tower was commission by Walter Percy Chrysler (1875 to 1940), who funded this build solely from his considerable personal wealth.

Built between 1928 and 1930, the structure was close in height to its rival, 40 Wall Street (formerly the Bank of Manhattan Trust building), and so a secret plan was hatched to increase the height further. A 125-foot / 38-meter stainless steel spire was quickly ordered and delivered in sections, being partially assembled inside the building and then hoisted into position, bolted together and erected in less than two hours. Upon its completion, the Chrysler Building was 1,047 feet / 319 meters high and immediately became the tallest structure in existence, dwarfing the 927-foot / 283-meter 40 Wall Street. However, this record was short-lived and was broken again just 11 months later, by the Empire State Building.
Open hours: Monday to Friday - 08:30 to 17:30 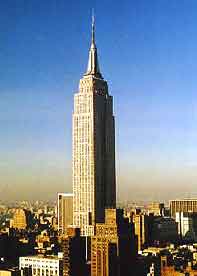 Address: 350 5th Avenue, New York City, NY, 10118, USA
Tel: +1 212 736 3100
One of the most stately of all the New York landmarks, the Empire State Building is a world-famous Art Deco skyscraper located on 5th Avenue and West 34th Street. Construction of this tower began at the beginning of 1930 and it grew at a staggering rate, with the workforce of more than 3,000 people managing to build up to four storeys in a single week.

Opened the following year at the cost of more than $40 million, it remained the tallest building on the planet for some 40 years, boasting 102 storeys and measuring in at approximately 1,250 feet / 381 meters, not including the antenna spire. The Empire State Building gained much affection when it featured in the 1933 film classic King Kong, with subsequent movie appearances including Sleepless in Seattle (1993), Independence Day (1996) and The Day After Tomorrow (2004).
Open hours: daily - 09:30 to midnight

Address: Battery Place, New York City, NY, 10004, USA
Tel: +1 212 809 5508
Covering approximately 25 acres / 10 hectares, Battery Park provides an important recreational space and is to be found on the far southern side of Manhattan. This green space was actually once an island, before an ambitious landfill project in the 19th century literally filled in the gap and connected it to the mainland. A series of artillery batteries were formerly located onsite, giving the park its name, while various attractions are based here, such as the early 19th-century Castle Clinton, the East Coast WWII Memorial and regular ferries to nearby Staten Island and Ellis Island. Close by, the James Watson House is a notable historic building and stands on State Street.

Address: 154 West 57th Street / 881 7th Avenue, New York City, NY, 10019, USA
Tel: +1 212 247 7800
Carnegie Hall is sited on the corner of West 57th Street and 7th Avenue, within Midtown Manhattan, where it is listed as a US National Historic Landmark. The hall was built between 1890 and 1891, being funded by namesake Scottish-American industrialist Andrew Carnegie (1835 to 1919), and remained in the family until being sold to a real estate developer in 1925. Over the years, innumerable acknowledged artists have performed here, including the likes of The Beatles, The Beach Boys, Judy Garland, Billie Holiday and Frank Sinatra, as well as Russian composer Tchaikovsky and many leading jazz musicians.

Address: Fort Washington Avenue, New York City, NY, 10033, USA
Located in the northerly Harlem neighborhood, the George Washington Bridge has spanned the Hudson River since opening in 1931, after just four years of construction. This suspension bridge links Manhattan with the Washington Heights area, being crossed by both the US Route 1/9 and Interstate I-95. There are actually two levels of traffic, with the upper levels comprising a total of eight lanes, and the lower level featuring six lanes. This currently ranks as the busiest bridge on the planet, being used by more than 100 million vehicles annually. At night, the illuminations transform the structure and are particularly impressive, with good photo opportunities presenting themselves from the Riverside Drive.