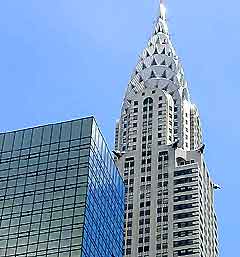 Since the very genesis of modern America, New York has been at the core of its history. A vital battleground during the Revolutionary War, New York went on to emerge as one of the young nation's primary centers of commerce and development.

Its economic and cultural influences continue to ripple and sway global trends today, in everything from fashion to investment banking.

Thanks to the prevalence of beavers, and the fashion craze for their fur in Europe at the time, New York owes much of its existence to the Dutch traders who based themselves in a settlement they named New Amsterdam in 1625. Of course, the British also wanted this strategic harbor and Hudson River access, so the two colonial powerhouses went head to head for years. The English eventually won in 1664 and renamed the settlement New York.

The British continued to shape the history of New York for the next century as it grew in population and importance as a major trading port for the colonies. By 1765, the colonists were growing tired of increasing taxation on their products, a sentiment that resulted in the birth of the Sons of Liberty political group - a precursor to the rebels who would eventually fight in the American Revolutionary War. For some ten years, the Sons fought running skirmishes with the British Redcoats stationed in New York.

Several important battles were fought in New York during the Revolutionary War, such as the Battle of Long Island in 1776 - the largest battle of the war. Shortly after the war ended, New York was named the new nation's first capital in 1785 and was soon the largest city in America. The first Congress met in Federal Hall, a building still in place on Wall Street, to draft the original Articles of the Constitution.

The Engine of a New Nation

Although the honor of hosting the nation's capital moved to Philadelphia in 1790, the history of New York continued just as importantly as the economic heart of the new nation. With the opening of the Erie Canal to its Atlantic port in 1819, the city exploded with new immigrants and business.

New York's history is integrally tied to the waves of immigrants who came to the city in the 1800s, carving up the street grid into ethnic boroughs that remain mostly intact today. By 1850, Irish immigrants made up a quarter of the city's population, with Hell's Kitchen their neighborhood. During the 19th century, the city developed cutting-edge infrastructure and novel urban concepts like Central Park, the first of its kind in the country.

Following the Civil War in 1865, European immigration accelerated. New York's Ellis Island was the first stop for millions of hopefuls, with the neighboring Statue of Liberty erected in 1886. The year 1898 saw the city consolidate into the five still existing boroughs, when separate cities such as Brooklyn and the Bronx joined Manhattan.

A Land of Skyscrapers and Broken Dreams

The 1900s was a period of relentless economic growth, evident in the staggering number of historic skyscrapers that fill the city today, like both the Chrysler Building and the Empire State Building. New York City weathered the Great Depression exceptionally well and by the end of WWII, it was without question the world's most important city.

Like so many American cities in the 1960s and '70s, New York took a turn for the worse. Gang violence, drug use and general disorganization were the norm rather than the exception. In the 1980s, Wall Street pulled the city out of the mire, giving it another solid run of prosperity until New York's history was changed again in 2001, with the devastating terrorist attacks on the World Trade Center. However, this city built on dreams and determination has proved to be as resilient as any urban metropolis in the world today.