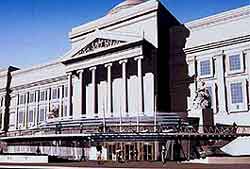 The museum scene in New York is one to be applauded and the list of cultural attractions seems to be almost endless. Particularly noteworthy is the large concentration of museums located along 5th Avenue and this area is often referred to as New York's Museum Mile.

One for all the family and located part-way between the Conservatory Garden and the Academy of Medicine Library, the Museum of the City of New York lies alongside Central Park. Visitors will find a wide variety of objects, costumes, photographs, prints, maps, dioramas and memorabilia, tracing the history of the city from its humble beginnings in the 16th century to its present day glory. Standing on 79th Street, the American Museum of Natural History (AMNH) is another popular family orientated attraction and worth penciling in.

Museum of the City of New York

Address: 1220 5th Avenue, New York City, NY, 10029, USA
Tel: +1 212 534 1672
Highlights at the Museum of the City of New York include the re-creation of John D. Rockefeller's master bedroom and dressing room, a section devoted to the history of the famous Broadway theater district, and a large furniture exhibition with antique furniture built between 1790 and 1890. There is also a permanent exhibition showcasing a large number of toys and dolls.
Open hours: Wednesday to Saturday - 10:00 to 17:00, Sunday - 12:00 to 17:00
Admission: charge, discounts available for children, seniors and families

Museum of Arts and Design

Address: 2 Columbus Circle, New York City, NY, 10019, USA
Tel: +1 212 299 7777
Founded in 1956, in 2002, the American Craft Museum changed its name to the Museum of Arts and Design, to affirm its commitment as the nation's showcase for contemporary crafts. This venue contains many objects that are prime examples of form and function, and these include baskets, jewelry, decorative arts, furniture and hand-blown glass. There are also lectures, special programs, workshops and demonstrations available here.
Open hours: Tuesday and Wednesday - 10:00 to 18:00, Friday to Sunday - 10:00 to 20:00
Admission: charge, discounts available for children and seniors, children 12 years old and under are free

Address: 25 West 52nd Street, New York City, NY, 10019, USA
Tel: +1 212 621 6800
Formerly known as the Museum of Television and Radio, the Paley Center for Media resides in central New York and is a modern attraction with many interactive displays. You can watch and hear all of the great names from the television and radio at private consoles, which are available for up to two hours. There are also computers where you are able to search the extensive archives to find some of the great television and radio moments of history. The Paley Center includes two theaters and a number of screening rooms showing a variety of selected programs.
Open hours: Tuesday to Sunday - 12:00 to 18:00
Admission: charge

Address: South Street Seaport, Fulton Street / South Street, Pier 17, New York City, NY, 10038, USA
Tel: +1 212 748 8600
Located within the aptly named Historic Cobblestone District, the South Street Seaport Museum comprises both a center for children and a series of three gallery spaces. There are also a total of three historic ships to be found here, on the southern side of the pier. Riverboat cruises are available from Pier 16, while the huge selection of surrounding shops also serves as a major draw card.
Open hours: daily - 10:00 to 17:00
Admission: charge, discounts for children

Address: 48 Wall Street, New York City, NY, 10005, USA
Tel: +1 212 908 4110
Standing on the world-famous Wall Street and within the historic Bank of New York building, the Museum of American Finance was established in 1988, when it was known as the Museum of American Financial History and situated on Broadway. Relocated as recently as 2008 and now something of an educational institution, this cultural and independent attraction is affiliated with the Smithsonian Institution and celebrates the city's endless entrepreneurship and success, which combined have made this the world's financial capital.
Open hours: Tuesday to Saturday - 10:00 to 16:00
Admission: charge, discounts for students and seniors, members and children six years old and under are free

Address: Ellis Island, New York City, NY, USA
Tel: +1 212 269 5755
The city's interesting Immigration Museum is to be found on Ellis Island, where it is next to the Statue of Liberty and well-connected by regular passenger ferries. Visitors can expect films showing the experiences of immigrants upon their arrival in the New World, as well as an audio guide of the exhibits, which lasts approximately 50 minutes. Of note, the last ferry of the day returns to Battery Park at 17:00 or thereabouts.
Open hours: daily - 09:30 to 17:15
Admission: charge, discounts for children

Museum of Chinese in America (MOCA)

Address: 215 Centre Street, New York City, NY, 10013, USA
Tel: +1 212 619 4785
Established at the beginning of the 1980s, the Museum of Chinese in America is situated on Centre Street, in between the Little Italy and SoHo districts, and actively promotes Chinese crafts through regular talks and workshops. Over 150 years' worth of Chinese American history is clearly documented here, with a host of related collections, letters and documents, multimedia presentations, festivals and community projects.
Open hours: Monday and Friday - 11:00 to 17:00, Thursday - 11:00 to 21:00, Saturday and Sunday - 10:00 to 17:00
Admission: charge, discounts for students and seniors, children eight years old and under are free

Address: 278 Spring Street, New York City, NY, 10013, USA
Tel: +1 212 691 1303
Situated within a beautiful period firehouse dating back to the early 1900s, the NYC Fire Museum is certainly the place to come if you are interested in the history of American firefighting. Pictures, photographs and documents all tell the story of the evolution of the life of local firemen, while the stars of the show are the period horse-drawn firefighting carriages and the present-day fire engines. Visitors will also likely be interested in the permanent exhibit and memorial relating to the 9/11 terrorist attacks on the city's World Trade Center.
Open hours: Tuesday to Saturday - 10:00 to 17:00, Sunday - 10:00 to 16:00
Admission: charge, discounts for seniors, students and children under 12 years old

Address: Pier 86, West 46th Street / 12th Avenue, New York City, NY, 10036, USA
Tel: +1 212 245 0072
The majority of the exhibits at the Intrepid Sea, Air and Space Museum are actually housed on a WWII aircraft carrier ship named the Intrepid. Highlights include everything from fighter planes, helicopters and a submarine (the Growler), to military and space artifacts. There is also a Virtual Flight Zone where visitors can feel the thrust of a supersonic jet plane, and a 4D Motion Ride Theater with realistic flight simulations.
Open hours: April to September, Monday to Friday - 10:00 to 17:00, Saturday and Sunday - 10:00 to 18:00; October to March, Tuesday to Sunday - 10:00 to 17:00
Admission: charge

Address: Central Park West at 79th Street, New York City, NY, 10024, USA
Tel: +1 212 769 5100
Home to in excess of 30 million relics and artifacts, the American Museum of Natural History is an outstanding attraction for all ages and dates back to the late 1860s. Now enjoying an enormous four million visitors each year, the AMNH is perhaps best known for its fossil halls, where you will discover the largest collection of fossilized dinosaurs and mammals in existence. Other attractions here include the Bernard and Anne Spitzer Hall of Human Origins, the Harry Frank Guggenheim Hall of Minerals, the Morgan Memorial Hall of Gems, the Arthur Ross Hall of Meteorites and the Hayden Planetarium.
Open hours: daily - 10:00 to 17:45
Admission: charge, discounts for seniors, students and children, children two years old and under are free

Museum of the City of the New York (MCNY)

Address: 1220 5th Avenue, New York City, NY, 10029, USA
Tel: +1 212 534 1672
Founded in 1923, the Museum of the City of the New York serves as both an art gallery and as a museum of city history. Sited on the northerly end of the renowned Museum Mile, this award-winning attraction faces Central Park and has recently been greatly extended and refurbished, at the cost of almost $30 million. The MCNY enjoys local government support and occupies an especially attractive building with neo-Georgian architecture. Exhibits include costumes, antique furniture, militaria, theater memorabilia, toys, and information about futures trading, as well as a host of paintings, prints, photos and sketches.
Open hours: Tuesday to Sunday - 10:00 to 17:00
Admission: charge, discounts for seniors, students and families (up to two adults), children 12 years old and under are free