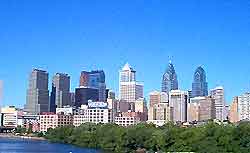 Philadelphia, Pennsylvania, was once the nation's capital and this is a major, bustling city, retaining a certain charm and quaintness, with cobblestone streets, historic buildings and colonial houses. The city of Philadelphia is where America declared its independence on the 4th of July, 1776 and is full of historic tourist attractions.

The city of Philadelphia, often known as 'Philly', features many sleek shopping districts, five-star restaurants and America's largest colonial district. The 'Avenue of the Arts' can be found to the south of the City Hall and is lined with entertainment venues, art galleries, museums and theaters. Within easy reach of nearby New York city, Philadelphia should not be overlooked.

Many of Philadelphia's main tourist attractions can be explored on foot and guided walking tours are often a useful way to learn about the city's past. The Independence Visitor Center, on the corner of Market Street and 6th Street, serves as the city's principal tourist information center. Also on Market Street is the Philadelphia Convention and Visitors Bureau, while a further tourism outlet stands on the corner of 15th Street and the JFK Boulevard. These information centers all provide a good place to pick up maps, which clearly mark the city's main districts, such as the Independence National Historical Park, the Italian Market area, Manayunk, Penn's Landing, Rittenhouse Square and South Street. 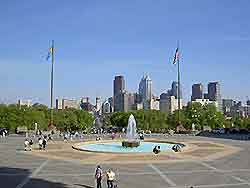 Hotels in Philadelphia are widespread, with plenty of accommodation throughout the city, including hotels along Market Street, Roosevelt Boulevard, Sansom Street, Walnut Street, Dock Street and the Avenue of the Arts. There are also further hotels close to Philadelphia International Airport (PHL), which stands to the southwest of the city. More information about Philadelphia Hotels.

Philadelphia has many extremely popular tourist attractions, including the Independence Hall - an iconic building, heralded as the birthplace of the US, with information about the signing of the Declaration of Independence; the Liberty Bell - a giant bell, regarded as a symbol of freedom; Philadelphia Zoo - America's first zoological gardens, dating back to 1874; Fairmount Park - the world's largest landscaped park, divided by the Schuylkill River; and the Morris Arboretum - founded in 1887 and home to English, Japanese and colorful rose gardens.

Other main tourist attractions in Philadelphia include the Benjamin Franklin Bridge - once the largest single-span suspension bridge in existence, completed in 1926; the Philadelphia City Hall - opened in 1900, when it became the city's tallest structure; Elfreth's Alley - the oldest residential street in America, dating back to the early 1700s; Powel House - a prominent Georgian home built in 1765; Carpenter's Hall - a stylish red-brick building originally used as the guildhall for the city's carpenter community; and the Cathedral Basilica of SS. Peter and Paul - a stunning Italian-style building. More information about Philadelphia Tourist Attractions and Philadelphia Landmarks. 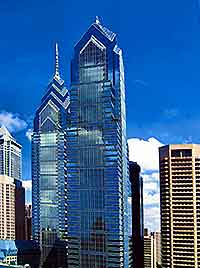 Philadelphia also has plenty of museums to enjoy, such as Franklin Court - on the site of Benjamin Franklin's first home, full of information about this great man; the Franklin Institute Science Museum - a giant complex packed with clever scientific exhibits and an IMAX theater; the Independence Seaport Museum - with important nautical artifacts showing how the Delaware and Schuylkill rivers shaped the fortunes of Philadelphia; the National Constitution Center - a multi-million dollar complex with information about the American Revolution; the Philadelphia Museum of Art - the city's premier cultural attraction, resembling a Greek temple; the Athenaeum - with more than one million rare books; and the Pennsylvania Academy of Fine Arts - the nation's oldest arts school. More information about Philadelphia Museums and Philadelphia Art Galleries.

Tourist attractions located nearby Philadelphia include the Adventure Aquarium - standing in Camden, New Jersey, with more than 4,000 creatures and the second-largest water tank in the USA; the Amish Country - a beautiful part of Pennsylvania's countryside, including the tranquil area of Lancaster; the Barnes Foundation - containing some of the most prized paintings and masterpieces in the world, including works by Renoir, Picasso and Van Gogh; and Longwood Gardens - located to the west of Philadelphia, with landscaped gardens dating back to 1906 and an important collection of bonsai trees. More information about Philadelphia Attractions Nearby.