Getting Around, Las Vegas Travel, Transport and Car Rental

Las Vegas is a very easy city travel around and there are several convenient methods of transport readily available in the city, including traveling by car, bus, trolley and taxi. The city is flat, the streets are wide and often the best way to travel short distances in Las Vegas is by foot. Walking in the city also provides a relaxing way to do some Vegas sightseeing.

Las Vegas is served by one of Nevada's busiest airports, McCarran International Airport (LAS), handling an enormous number of international and domestic flights. 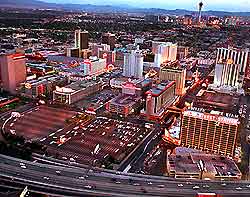 Driving in Las Vegas is very easy and the streets of the city follow a grid pattern. With wide roads and good signposts, most people that travel by car in the city drive quite slowly due to the large presence of traffic police. Las Vegas has a fairly high number of jaywalkers and drivers should be particularly wary of pedestrians trying to cross the busy roads. There are numerous large parking areas at the hotels and many of these have 24 hour security. If you want to travel outside of Las Vegas and explore the surrounding area, hiring a car is an excellent method of transport and highly recommended.

The Citizens Area Transit (CAT) is the local bus company in the city and provides an excellent bus service that travels along the famous Strip and in the downtown region. There are numerous bus routes and the bus service generally operates between 05:30 to 01:30. Bus route maps are available at all the convenience stores and bus travel is an inexpensive way to travel around this large city.

The Las Vegas Strip trolley resembles the famous cable cars of San Francisco. These old-fashioned, air-conditioned trolley have stylish interiors and travel the entire length of the Strip, from the Manadaly Bay hotel casino at the southern end of the Strip to the Stratosphere Tower at the northern end.

There are several trolleys that travel in the downtown area of Las Vegas. These popular trolleys travel in a large loop and operate at 20 minutes intervals, from 08:00 until 21:30 every day.

Taxis in the city are fairly plentiful throughout Las Vegas and can be easily caught at the entrance to most hotels. The Strip is just 4.5 miles / 7 km long and therefore a journey along the entire length is usually fairly short, inexpensive and very convenient. An increasing number of taxi firms in the city are happy to accept credit cards.