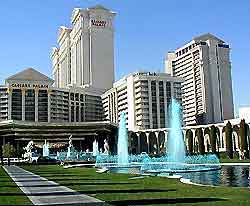 
In 1997, Las Vegas Caesar's palace underwent a staggering USD 600 million renovation project, which has ensured the Caesars Palace is simply better than ever, and is still the original Las Vegas theme-resort and casino. 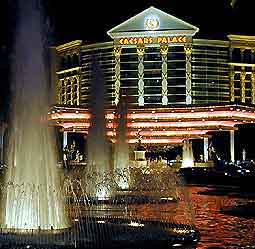 Tel: +1 702 731 7110
Caesars Palace Hotel Casino in the Las Vegas Strip opened in 1966 and is one of the largest and most important casinos in Las Vegas. The casino itself measures around 45,000 square feet and includes the latest video games, nine excellent restaurants serving some of the best food in Las Vegas, swimming pools inlaid with marble and granite, a movie theater with a dome-shaped screen, three live entertainment lounges, and of course, some of the top gaming facilities in Las Vegas.

At the center of the complex are a total of 100 card tables and nearly 2,000 slot machines, some of which accept USD 500 tokens. With experienced croupiers, a busy, exciting atmosphere and impressive status, Las Vegas Caesars Palace is always a busy place for gamblers in Las Vegas.

Las Vegas Caesars Palace opened this enchanting feature in 1996 and it quickly became a major tourist attraction for the Caesars Palace complex. Caesar's Magical Empire in Las Vegas is based on the underground world of ancient Rome and features tunnels, grottoes, theaters, dining chambers and illusions around every corner.

Open hours: Tuesday to Saturday - 16:30 to 21:30
Admission: charge, discounts are available for children under 10 years old