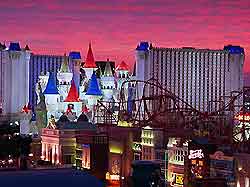 Las Vegas is a wonderful city to visit at any time of the year. The city does not really have an 'off-season' and is busy throughout the year. Even in the coldest winter, people flock to Las Vegas to enjoy the many attractions, resorts and casinos. The quietest time in the city is the first three weeks in December and weekdays during July. These parts of the year are probably the only time when hotels reduce their prices to attract more tourists to the Strip. 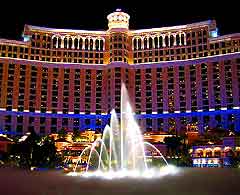 With so many people carrying large amounts of cash on them and drinking heavily, pickpockets are widespread in Las Vegas. Always be aware of your surroundings and avoid carrying large amounts of cash if possible. Thieves are very skilled, so be particularly careful with hand baggage and consider using a concealed money belt. Never leave money unsecured in your hotel room. Las Vegas is keen to stamp out crime wherever possible and there are often large numbers of police and security officers patrolling the area as a deterrent and surveillance cameras are everywhere.

English is the most commonly spoken language in America, but locals in the city have developed there own version, an 'American English'. This consists of many variations of words, such as 'sidewalk' for pavement and most locals tend to speak very fast.

The cosmopolitan city of Las Vegas is home to a large number of different cultures and many religions have a presence. Newspapers generally list times of services for the main denominations.

Most pharmacies are open from at least 09:00 until 19:00. Drugstores will usually open until 21:00 and these normally have a pharmacy counter for dispensing prescriptions. Drugstores are like mini-supermarkets, with a wide range of products on sale.