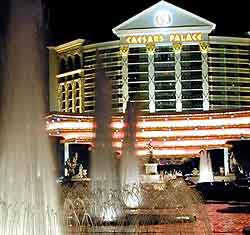 Who'd have thought that a city in a desert would become the 'Entertainment Capital of the World'. From railroad stop-off backwater to major city in the space of a few decades, Las Vegas may not be spectacular for the puritan, but it is nonetheless intriguing.

When gambling was legalized in Nevada in 1931, the history of Las Vegas was changed forever, with big casinos appearing in the 1940s and later, mega shows and wacky entertainments beyond the imaginations of most holiday makers.

In early Las Vegas history, European pioneers happened upon the Paiutes Indians, who had been living in this area of Nevada for centuries. The Mormons built a fort (the Old Mormon Fort) here in the mid-19th century, during their quest to create a state and to spread their religious movement among the Indians.


There was mining in the area early on, although nobody really made roots here until 1865, when prospectors built up the fort with various businesses to supply the miners, whilst also offering shelter for travelers on the Los Angeles to Salt Lake City wagon road. The Union Pacific Railroad, connecting Utah and California, opened up Las Vegas, which became a popular stop-off point for travelers, with hotels, stores and other businesses quickly erected along Fremont Street. In 1905, Las Vegas was made a city, although it remained a backwater.

The construction of the nearby Hoover Dam in the early 1930s brought thousands of workers to the area, just in time for the legalization of gambling in Nevada in 1931, with casinos attracting the workers and their hard-earned cash. Roads from Los Angeles were improved, and ranches and hotels were built to tempt in tourists from the big city.

Las Vegas expanded fast from this point, although it wasn't until the 1940s that the casinos were taken more seriously and larger ones built. The swanky El Rancho Vegas resort was the first, opening up on the Strip. El Rancho was followed by the Flamingo Hotel in the year of 1946, which was fronted by mobster Benjamin 'Bugsy' Siegel. The mob connection would continue through the years, as would the practice of one-upmanship, with the continual emergence of bigger and better casinos.

Along with the early workers and tourists, the arrival of the military in Nevada - specifically for the Manhattan Project, saw a huge influx of scientists and workers. Nuclear testing went on in the 1950s to the northwest of the city, although the casinos remained full. Las Vegas was cleaned up in the 1960s, with large corporations taking control of things and touting it as a family destination. However, it was still largely controlled by the mob.

Stiff federal regulations and a drive to clean up the city wiped out mob involvement in the 1990s, when Howard Hughes acquired the Desert Inn. Atlantic City was emerging as a real contender to Las Vegas at this point, although all-encompassing hotel complexes were erected, with one after the other becoming the 'best' or the 'world's largest', including Caesar's and the gargantuan MGM Grand.

These mega hotels would include sell-out shows with class acts, malls, nightclubs and extravagant entertainment options, such as New York-New York's rollercoaster, the Paris Hotel's half-scale Eiffel Tower, and the Venetian's canals. The fountains of the Bellagio are a major hit, while the Stratosphere occupies a lofty tower. In 2005, billionaire Steve Wynn went one further with his mega Wynn Las Vegas, which comes complete with a golf course.