Although it would be fair to say that Las Vegas isn't exactly what most people consider when planning a family holiday, there are certainly many excellent child-friendly attractions dotted around the city, with a number residing within major hotel complexes. One such attraction is the hugely popular Shark Reef at Mandalay Bay, which is an impressive public aquarium based at the Mandalay Bay Resort and Casino, near the Las Vegas McCarran Airport and the Bali Hai Golf Club.

Close by, the Mystic Falls Park at Sam's Town Hotel may well appeal, with its exotic creatures and musical laser extravaganza. 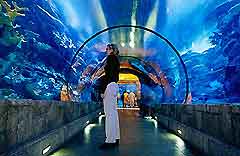 Address: 3950 Las Vegas Boulevard South, Las Vegas, Nevada NV, 89119, USA
Tel: +1 702 632 4555
Opened in 2000, the Shark Reef at Mandalay Bay is one of the most impressive aquarium exhibits that you are ever likely to visit and remains a major family tourist magnet in southern Las Vegas, being popular with both adults and children alike. Attractions include a spectacular tank of jellyfish, numerous large blue sharks, a lengthy shark tunnel, stingrays, giant turtles and alligators. The main display tank is quite simply enormous and contains some 1.3 million US gallons of water. Worth looking out for its the Komodo dragon living in the Jungle Temple exhibit. Children will of course be sure to enjoy routing around in the gift shop, which is full of marine-based cuddlies and similar fish-themed goodies.
Open hours: Sunday to Thursday - 10:00 to 20:00, Friday and Saturday - 10:00 to 22:00
Admission: charge, children under four years are free, discounts available for children under 12 years old 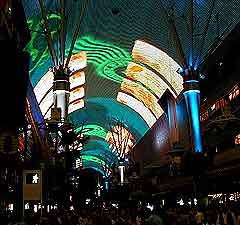 Address: 5111 Boulder Highway, Las Vegas, Nevada NV, 89122, USA
Tel: +1 702 456 7777
The Mystic Falls Park offers a fully enclosed park environment and is located in the large atrium of Sam's Town Hotel. Children will particularly enjoy the sparkling waterfalls and the wildlife, which includes attractions such as exotic birds, squirrels and there is even a bear. The Mystic Falls comes with restaurants, shops and a bar, although the main highlight is without question the regular Sunset Stampede laser show.

Children will be mesmerized by this choreographed laser show, which features digitally recorded music by the Indianapolis Philharmonic Orchestra. This popular light show takes place from the early afternoon until late at night and is a relaxing way to spend an afternoon.
Open hours: daily - 24 hours
Admission: free