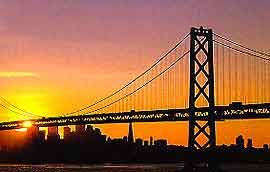 San Francisco, California, is a spectacular peninsula surrounded by water on three sides and grows from the inside out. This modern city has become one of America's favourites and is visually spectacular, with many world-famous steep hills offering incredible views of San Francisco Bay and the breathtaking Golden Gate Bridge, which opened in 1937 and immediately became the longest suspension bridge in the world.

The Pacific Ocean forms the westerly boundary of the peninsula, while San Francisco Bay lies directly to the east. In total there are three main districts - downtown (between the bay, Market Street and Van Ness Avenue), South of the Market District (SoMa) and the westerly side of the city, which is mainly residential and incorporates Pacific Heights, Richmond, the Golden Gate Park and the Marina area. For everything in the way of tourism, pay a visit to the highly regarded San Francisco Visitors Information Center, which is located within the Hallidie Plaza on the corner of Market Street and Powell Street.

Accommodation in San Francisco can be a little expensive, but there are certainly a large number of hotels to choose from. There are usually some excellent value hotel deals to be found, even in the heart of San Francisco, particularly when you book in advance. The summer season is when most hotels tend to hike their rates, although do expect foggy mornings at this time of the year. Weekend reservations are necessary several weeks in advance when staying at this city. For the cheapest and most readily available lodging, consider staying at one of the mainstream chains on Lombard Street or Fisherman's Wharf, while San Francisco hostels provide a good alternative for backpackers or those on a tight budget. The most popular youth hostels can be found sited on stretches such as the Isadora Duncan Lane, O'Farrell Street and Sacramento Street. 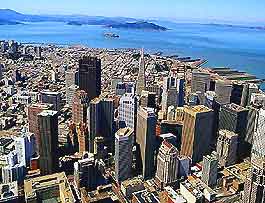 San Francisco is regularly classed as one of the top tourist destinations in the world and it is easy to see why. With top attractions such as Alcatraz Island - the 'Rock in the Bay' which was once the most notorious prison in existence, housing some of America's most dangerous offenders; Pier 39 on Fisherman's Wharf - a lively bay area with numerous shops, arcades, seafood restaurants, cafés, fairground rides, ocean views and its own colony of sea lions; Lombard Street - probably the world's most bendy street; and of course the famous San Francisco cable cars, which provide cheap and easy access to the whole city and its many steep hills. More information about San Francisco tourist attractions.

There are also some great museums here, boasting a wealth of information about the city itself and exhibiting many interesting collections, such as the Museum of the City of San Francisco - established in 1991 and telling the interesting story of the city's history, and the unusual Fortune Cookie Museum - a small fortune cookie factory producing over 20,000 fortune cookies a day in the city, where fortune cookies were actually invented. San Francisco can also boast numerous excellent art galleries, shopping districts and restaurants. In fact, when it comes to food there are almost 4,500 different restaurants, cafés and bars in this part of California, which has become nothing short of the nation's trendsetter when it comes to food.

Another major San Francisco tourist attraction is the Hakone Japanese Tea Garden, situated in the vast Golden Gate Park. These traditional Japanese gardens provide the most tranquil place in the whole of the city and cover around 2 hectares / 5 acres. With koi carp ponds, pagodas, drum bridges and a Japanese Tea Room, these exquisite landscaped gardens are well worth a visit.

The local climate is generally mild and very sunny, in spite of the famous morning fog. The city is without question a lively and friendly Californian destination, with some highly developed areas, including tall skyscrapers, and contrasting, more traditional districts, such as Chinatown - home to one of the largest Chinese communities outside of Asia. The cosmopolitan city of San Francisco is diverse, open minded, exciting and most of all, enjoyable.