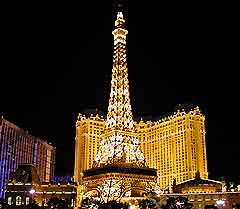 Whatever time of the day you are driving down the Las Vegas Boulevard (Strip) you cannot fail to be at least a little overwhelmed by the sheer size and grandeur of the plentiful hotels and their related landmarks. However, if you are here at night, then the neon lights and floodlit facades take on a whole new character and drama.

Owned by the Caesars Entertainment Corporation and much photographed is the famous Paris Las Vegas Eiffel Tower, which is around 50 storeys in height and features glass elevators and a popular viewing platform. From here, visitors can enjoy uninterrupted panoramas of the Strip below, from a height of approximately 170 meters / 558 feet. A trip to the Bellagio Fountains also comes recommended, as do the thrill rides close to the very top of the Stratosphere tower, which is actually the tallest observation tower in the whole of the United States.

Address: 3655 Las Vegas Boulevard South, Las Vegas, 89109, Nevada, USA
Tel: +1 702 946 7000
Yet another themed hotel casino standing on the Strip, Paris Las Vegas came into being in 1999 and immediately became one of the most famous and humorous landmarks in Las Vegas, with its recreation of the iconic Eiffel Tower. However, whilst the tower may well be a scale model, being roughly half of its original size, it is still quite an imposing sight and is accompanied by various other Parisian replicas, such as the Arc de Triomphe, the Champs Elysees, the Opera House and the Parc Monceau, as well as its very own version of the romantic River Seine. The hotel itself stands out, with 34 storeys, more than 2,900 rooms and permanent shows starring internationally recognised singers.
Open hours: daily - 10:00 to 01:00
Admission: charge, children five years old and under are free 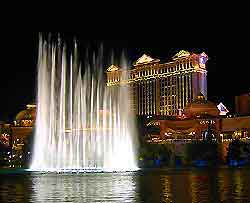 Address: 3600 Las Vegas Boulevard South, Las Vegas, 89109, Nevada, USA
Tel: +1 702 693 7111
The Fountains of Bellagio are breathtaking and hold much appeal for tourists looking for something a little different. Fronting the grand Bellagio Hotel and Casino, the 1,200+ illuminated jets of water have been carefully choreographed, dancing to music and regularly attracting a crowd, with the performance being at its most impressive once the sun has set and darkness has arrived. The fountains form the centerpiece of a giant 9-acre / 4-hectare lake and can reach heights of more than 100 meters / 328 feet. It is widely believed that the Bellagio Fountains cost in the region of US$40 million to construct and the show is completely controlled by computers, with the addition of 'Extreme Shooters' in 2005.
Open hours: every 30 minutes from Monday to Friday - 15:00 to 18:00, Saturday and Sunday - 12:00 to 18:00
Daily - every 15 minutes after 18:00 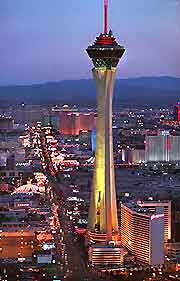 Completed in 1996 at the cost of US$550 million and towering high over the Las Vegas Strip, the Stratosphere is an enormous tower and one of North America's highest freestanding landmarks.

Part of a giant hotel complex, complete with more than 2,400 guest rooms and a sizeable casino, the Stratosphere really is quite impossible to miss, towering for some 100 storeys and measuring in at just over 350 meters / 1,148 feet. There are no less than two observation decks, and as you would expect, the views are outstanding. Also on offer is a revolving restaurant named 'Top of the World', as well as a number of exciting rides, such as Big Shot (a gravity drop), the SkyJump (a decelerator descent) and X-Scream, which is a cross between a giant seesaw and a rollercoaster.