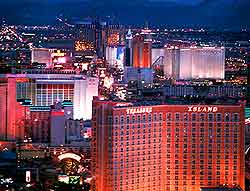 The Las Vegas of today is quite different to how the city was just a few years ago, in particular the famous Las Vegas Strip. When the Fremont Street Experience opened in December 1995, it converted downtown from an eyesore into a lively, vibrant and open-air pedestrian mall with stunning nightly light shows.

Also in this district of the Las Vegas Strip, three of the four major hotels have undergone extensive refurbishments and improvements, at a cost of millions. In particular, Main Street Station is now one of the finest hotel casinos in the city and provides excellent value for money.


The Las Vegas Strip has also undergone a complete transformation during recent years. Many of the Strip's large resorts and hotels have opened since the 1990s and these large resorts include massive shopping complexes, landscaped gardens, fine dining and superb casinos, with excellent gambling facilities. When Mirage first opened in 1989, it started this trend for glamorous casino complexes, with its many impressive features, such as the erupting volcano, glass-enclosed atrium filled with exotic plants, its white tigers, dolphins and large aquariums.

The hotel casinos that soon followed on the Las Vegas Strip were constantly trying to compete and improve upon each other, and the features have continued to get more incredible, fantastical and outrageous. Excalibur, a gleaming white castle complex, complete with drawbridge and moat, soon followed and this large Strip hotel casino was proud to present its main feature, a fire-breathing dragon. 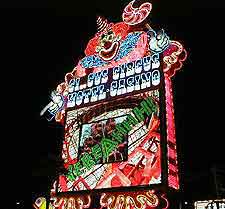 Circus Circus first arrived on the Las Vegas Strip in 1968, but caused much excitement in 1993 when it opened a five-acre amusement park. Also in 1993 saw the arrival of more extravagance on the Strip, including the stunning Luxor complex, the MGM hotel casino theme park and Treasure Island, complete with daily pirate battles.

Shortly after, the Las Vegas Strip was further enhanced when the incredibly tall Stratosphere tower was erected and became the tallest building in the west of America, also featuring the world's highest roller coaster. When New York-New York opened on the Strip, with its amazing array of top New York style attractions and high-speed roller coaster, many other hotels opened shortly after.

Las Vegas is continuing to reinvent itself and in particular the Las Vegas Strip is constantly opening new complexes, attractions, themed-resorts, golf courses, gardens, casinos and imposing hotels. This is an exciting time for the Strip as the city evolves.