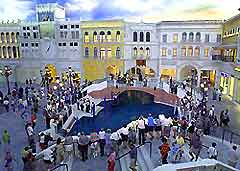 There is nowhere in the world that compares to Las Vegas for shopping. There are so many enormous malls and hotel shopping complexes both in and around the Strip, that it is difficult to decide where to go to spend your money. Las Vegas is home to literally thousands of shops, ranging from small, specialist shops to the largest chain department stores.

Shopping in Las Vegas can be particularly memorable when visiting themed complexes, which are often very atmospheric and lots of fun. Notable highlights include the Forum Shops at Caesars Palace, as well as the Venetian's Grand Canal Shoppes. There are plenty of cafés and restaurants throughout the city where you can take a break, recharge your batteries, and get ready for some serious spending of your holiday cash. 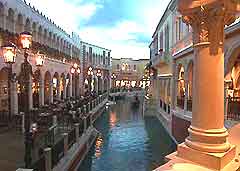 The south end of the Strip runs from Tropicana Avenue to the famous 'Welcome to Las Vegas' sign post. On the east side of this part of the Strip you will find tourist centers, fast-food restaurants, motels and casinos. Situated on the west side of some typical, large hotel resorts, including Mandalay Bay and Luxor. Nearer to the intersection of Tropicana Avenue and the Las Vegas Boulevard, known as the four corners, you will find four major hotels, the Excalibur, Tropicana, New York-New York and MGM Grand. All of the large hotel complexes feature a wide variety of shopping areas, selling clothes, jewelry, luggage and many other items.

The midsection of the Strip provides some of the best shopping in the city. From Harmon Avenue to Spring Mountain Road are some of the most extravagant shops in the country, including a Parisian district, North African bazaars, Roman streets and much more. In particular, Bellagio and Caesars Palace are full of excellent shops, restaurants and more than you can imagine and ever need.

The end of the shopping district to the north of the Las Vegas is marked by the Fashion Show Mall. However, there are numerous little shops and stores along this last stretch of the Strip, selling various souvenirs. In particular, Bonanza claims to be the world's largest gift shop and has an enormous selection of merchandise. Circus Circus is also located in this district and features a 40,000-square-foot retail center, filled with stores and restaurants.

The Fremont Street Experience dominates downtown and features a four block pedestrian mall, which is covered by a huge canopy, with more than two million lights. This large complex sells jewelry, clothes, gourmet food, souvenirs and much more besides.

Maryland Parkway can be found one mile east of the Strip. The best shopping areas in this district are at the intersections of Maryland Parkway, Flamingo Road and Tropicana Avenue. Here you will find countless malls, stores, national chains and in particular the Boulevard mall, which is one of the largest malls in Las Vegas.

Henderson, close to Las Vegas, is one of the fastest expanding cities in Nevada and is home to numerous superb shops. Just minutes from the Strip, shopping on Sunset Road and the Green Valley Parkway offers a more relaxed atmosphere, and the numerous stores sell unusual gifts, such as hand-blown glass and chocolate from the famous Ethel M. Chocolate Factory.

Every part of Stephanie Street, near Las Vegas, offers superb shopping and there are also many excellent places to eat. Stephanie Street also features a gourmet grocery store, a Barnes and Noble bookshop and a two-story mall with over 135 shops.

Here are some of the most popular Las Vegas shopping malls and department stores: