Getting Around, Granada Travel, Transport and Car Rental 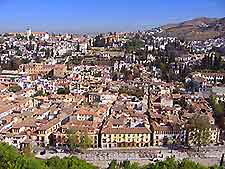 Granada is a major city and as you would expect, is home to an impressive transport infrastructure, with a range of inexpensive ways to travel around the area. Many holiday makers and visitors to Granada travel by air, arriving at the nearby Granada Airport (GRX), which offers good transport connections both to and from the city centre.

For those looking to travel around Granada on a budget, bus transport is the best option, with a discounted 'City Pass' ticket being available. Also worth noting, Granada s home to a busy train station, featuring long-distance trains to many prominent destinations around Spain. If you would like to travel when and where you like, then renting a car in Granada is probably the best mode of transport, with many inexpensive rental cars available both at the airport and around the city.

Address: E-18329, Granada, Andalusia, Spain
Tel: +34 958 24 52 00
Granada Airport (GRX) is located around 17 km / 11 miles to the west of the city centre and is connected by the A-92 Autovia. The airport is one of the main transport gateways into the region of Andalucia, serving mainly domestic flights, with many passengers travelling from both Madrid and Barcelona. Granada Airport (GRX) is a single-terminal complex and features fairly low annual passenger figures. The airport offers a range of ground transport options, such as buses, hotels shuttles and taxis, all of which travel into Granada city centre, with the journey lasting around 30 minutes. 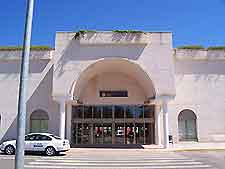 Renting a car in Granada is one of the most popular and convenient ways to travel around the city and explore the beautiful surrounding countryside, nearby regions and towns. Car rental is available at Granada Airport (GRX), where you will find a good selection of car rental transport companies available, including Atesa, Avis, Europcar and Hertz. Numerous major roads and highways lead to and from the city, providing fast connections with many tourist hotspots, including the Costa del Sol. Driving in the heart of Granada can become congested during peak hours and vehicular access to the Plaza Nueva area is often restricted at specific times during the day. 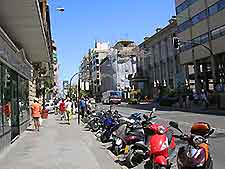 Tel: +34 952 185 480
Granada bus station can be found along the Carretera de Jaén, around 3 km / 2 miles to the northwest of central Granada. All of the city's main bus services travel to and from the station and provide an inexpensive method of public transport. Alsina Graells buses travel further afield, with regular services to Córdoba (three hours), Seville (three hours), Malaga (one and a half hours), Guadix (one hour), and Baza (two hours). Additional buses / coaches in the Granada area are operated by Alsa, and provide travel to many locations along the Mediterranean coastline, travelling as far as Barcelona. Bus transport in Granada is one of the cheapest ways to travel around the city.

Tel: +34 952 204 000
The train station in Granada can be found along the Avenida de Andaluces, around 1.5 km / 1 mile from the city centre. Close to the Avenida de la Constitución, Granada train station serves many major Spanish cities and locations, including Seville (three hours), Ronda (three hours), Malaga (two and a half hours), Córdoba (four hours) and Madrid (six hours). Other notable cities and towns connected to Granada by train transport include Linares-Baeza, Valencia and Barcelona. 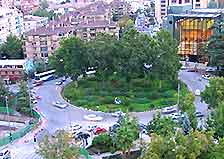 One of the most convenient ways to travel around the city of Granada, taxis can be found at a number of central taxi ranks - in front of both the bus and train stations, at the Plaza Nueva and Plaza de Triunfo, and close to the El Corte Inglés department store. Taxis can also be simply hailed on the street or pre-booked in advance. Further taxi ranks are located at the airport.