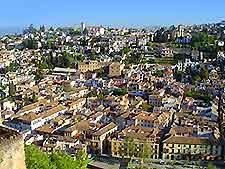 The city of Granada has become known for its impressive calendar of events, which take place year-round. Some of the most popular festivals in Granada include the carnival celebrations in February, Semana Santa / Holy Week at Easter time, the Dia de la Cruz (Day of the Cross) at the beginning of May, and Granada's Feria de Corpus Christi (Corpus Christi Fair) each June, which always draws large crowds.

For those visiting Granada with a music interest, the Festival Internacional de Música y Danza (International Festival of Music and Dance) in June and the International Jazz Festival at the end of October are not to be missed.