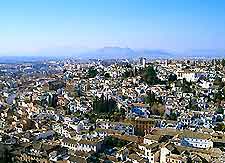 Although the charms of Granada attract many tourists, foreign property buyers are not as numerous here as they are in many other parts of Spain.

Properties are available in central Granada, as well as in the spectacular Sierra Nevada mountains that surround the city, often at prices considerably less than in popular Spanish resort areas. A home in Andalucia is not only a good investment for the future - it can also be a wonderful place to live.


Recently, an increasing number of buyers have chosen to purchase properties in need of renovation. These properties, generally in rural Granada, are priced much lower and offer the buyer the opportunity to acquire a home, restore it and if desired, to resell it at a substantial profit.

Property prices in sought-after Granada areas, such as Albayzin (Arabic quarter), have fallen due to the recent economic downturn and many owners have reduced their asking prices to ensure a quick sale, as they become unable to repay their mortgages.

In the inland villages of the province and along the Costa Tropical, apartments for rent can be found in many locations, including Almunecar, Los Guajares, La Herradura, Itrabo, Jete, Lecrin Valley, Lentegi, Lobres, Molvizar, Otivar, Salobrena and Velez de Benaudalla. A range of accommodation, from studio units to two-bedroom apartments with full amenities, is available, with large resorts offering leases of varying lengths.

Serviced apartments in general feature standards equivalent to hotels and resorts, although those located outside resorts may not have the full range of amenities. The apartments are typically furnished and air conditioned, and have fully-equipped kitchens and access to a swimming pool.

The price of property is still relatively inexpensive in Granada, making it a great choice for buying a second home. The region is becoming increasingly popular with buyers who are looking to avoid the Costa del Sol and other traditionally popular destinations.

Some Britons are actually buying their first homes in Spain rather than in the UK, attracted by current property prices. Given the recent economic downturn, many real estate experts are suggesting that this is the perfect time to buy property in Spain, before prices rise once again.

Foreign buyers should be aware that they will be responsible for paying taxes and fees, including notary fees and transfer taxes, as well as Spain's annual wealth tax, which is based on the value of the property owned.

There are many real estate agents in Granada and taking the time to find one that is willing to commit time to a prospective buyer is recommended. The largest agency isn't necessarily the most suitable and it is a good idea to select an English-speaking agent recommended by satisfied customers.

Following is a selection of estate agents and realtors in Granada that have English-language websites: