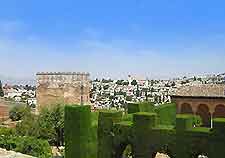 Parks and gardens in Granada vary greatly in both size and style and fall into a number of general categories. Royal Gardens in Granada are known locally as 'Jardin Real' and feature formal planting, clipped hedges and topiary. The beautiful and vast Generalife Gardens at La Alhambra fall into this category and are one of the best examples of this type of landscaped garden in Granada.

'Carmen' or 'villa' gardens in Granada are generally much smaller and usually part of a private villa. Often featuring terraces on different levels, together with fountains and less-formal, ornamental planting, Carmen gardens tend to be particularly tranquil spots and are occasionally opened to the public, such as Granada's Cipreses and Purificación 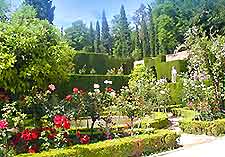 The last main category of gardens in Granada are 'cueva' or 'cave' gardens, individual private gardens which although fairly humble, are maintained with tremendous care and pride by their owners. Many of these gardens are surprisingly impressive and can be easily viewed from the outside. 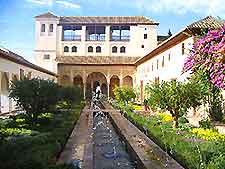