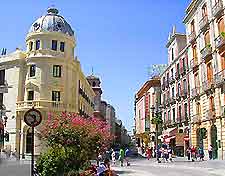 Granada is a sprawling city, with an enormous variety of shops and shopping districts, particularly around the Old Quarter area. Close to the cathedral, which dominates this part of Granada, popular places to shop in the historic Old Quarter include the Alcaiceria streets, where you will find an array of gift shops, local handicraft stores and jewellery, in a traditional village setting.

Other notable shopping areas in Granada include the Plaza de Bib-Rambla, which contains a number of popular florists, fashion boutiques and restaurants.


For more modern shopping, head to the southwestern side of Granada, with some of the main concentrations of shops standing along the streets of Gran Via de Colon, Obispo Hurtado, Recogidas, Reyes Católicos and Tablas. Some of the city's best stores can be found in and around the city's southern section, including the legendary Spanish department store of El Corte Inglés and the extensive Centro Comercial Neptuno indoor complex.

Granada is famous for its distinctive local marquetry, which is known as 'taracea' and is used to cover all kinds of objects, ranging from boxes and tables, to authentic Spanish guitars and chess sets. When searching for the best marquetry, be sure to head to the Alhambra region, where the Laguna Taller de Taracea store offers regular demonstrations of this historic Andalucian craft. 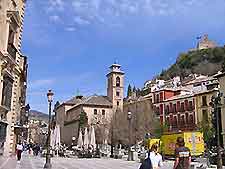 Shopping in Granada generally commences at around 09:00 onwards, with many shops choosing to take a long break during the customary Spanish siesta period in the afternoon, when the sun is at its hottest. Shops then reopen at around 16:00 and stay open right up to 19:00 or 20:00, although on Saturdays, hours are reduced. A number of the largest shops, shopping centres and supermarkets stay open throughout the day, although most close all day on Sundays, with only a small selection available in the city centre.

Many of the main shops in Granada line the city's thoroughfares, such as the Angel Ganivet, Cuesta de Elvira, Gran Via de Colon and Puerta Real streets, where you will find a host of shopping opportunities, including a number of antique stores selling authentic Andalucian furniture and Fajalauza pottery - a famous type of local glazed ceramic. For more traditional choices, a visit to the narrow streets of the Calle Caldereria Nueva will not disappoint, where many craft stores sell Moroccan handicrafts and souvenirs.

For fashion in Granada, head to the shops nearby the cathedral and the Puerta Real area, and also along the streets of Acera del Carro, Carrera de la Virgen, Pedro Antonio de Alarcón and Recogidas. Also worth a mention, the pedestrianised street of Calle de los Mesones is known for its funky clothes, while the shops around the Plaza Nueva area specialise in more ethnic clothing, together with shops selling jewellery and colourful rugs. Here is a small selection of the main shops and shopping centres in the Granada area.

El Corte Inglés
Address: Carrera del Genil, 20-22, Granada, 18009, Andalucia, Spain
Tel: +34 958 22 3240
No trip to a major Spanish city could be complete without visiting Spain's iconic department store El Corte Inglés, which is the ultimate shopping experience. Granada actually has two branches, with one along Carrera del Genil and another store standing on Calle Arabial, both of which offering an extensive selection of merchandise, ranging from homewares and hairdressing, to electrical goods and high-street fashion. El Corte Inglés also features a large supermarket, together with cosmetics, sporting goods and clothes for all ages, and can be found in the San Matias district.

Casa Ferrer
Address: 26 Calle Cuesta de Gomérez, Granada, Andalucia, Spain
Tel: +34 95 822 1832
The oldest studio in Granada still making traditional Spanish guitars, a trip to Casa Ferrer is a memorable trip. Casa Ferrer dates back to 1875 and is one of several workshops in this part of the city.