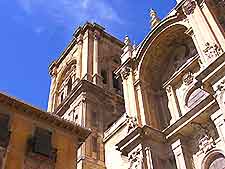 Overlooking much of central Granada, the Santa Maria Cathedral is a spectacular building, with a striking facade and a historic chapel area, known locally as the Capilla Real (Royal Chapel). Many other notable churches and convents can be found in and around the heart of Granada, including the Basilica de Nuestra Senora de las Angustias, which dates back to the 1600s. 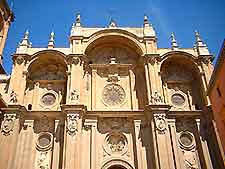 Address: Gran Via de Colón, 5, Granada, 18001, Andalucia, Spain
Tel: +34 958 22 2959
Standing in the centre of Granada, the Santa Maria Cathedral dominates the area and is a vast structure, surrounded by a mixture of other historical buildings. Dating back to 1523, Granada's cathedral is well-preserved and contains one main nave, four aisles, a circular apse, many ornate features and stone sculptures by Duque Cornejo, Risueno and Verdiguie. The cathedral's Royal Chapel is particularly impressive and features a museum area (Sacristio Museo de Capilla Real) with many stunning religious works of art. The cathedral's interior is flooded with natural light from large stained-glass windows.
Open hours: Monday to Saturday - 10:00 to 13:30, 16:00 to 19:00; Sunday - 16:00 to 19:00
Admission: free

Address: Carrera del Genil, Granada, 18000, Andalucia, Spain
Tel: +34 958 22 6393
Built in the 17th century, the Basilica de Nuestra Senora de las Angustias is a stunning church, located in the San Matias area of Granada. With Baroque-style architecture, twin towers, a marble altarpiece, a spacious and beautifully decorated interior, river views and regular masses, the basilica is one of the area's most important churches.
Open hours: daily - 11:00 to 13:00, 19:00 to 20:30
Admission: free 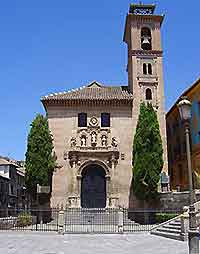