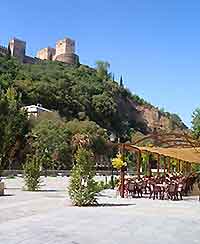 Granada is full of Tapas bars, dining venues and traditional restaurants, with a huge variety of cuisine being available around the city. Many dishes served at Granada's restaurants feature strongly Arab influences, especially the desserts.

Restaurants in Granada cater well for tourists and visitors, with plenty of international dining options available, including a good selection of European-style restaurants, specialising in Italian food or freshly caught seafood.

Where to Eat in Granada

Always popular with both locals and visitors in Granada, Tapas bars and restaurants are situated throughout the area and provide an attractive selection of small savoury nibbles. Tapas bars in Granada are typically Spanish and a designed to be the perfect accompaniment with wine, particularly at lunchtimes, and are often free. 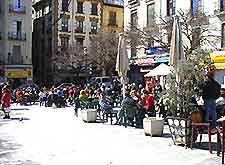 The main types of Tapas range from stuffed olives and cheeses, to potato chips and seafood snacks, such as sardines. Some of Granada's best Tapas bars and restaurants can be found around the Albayzin district, Plaza Nueva and along Carrera del Darro.

Many bustling restaurants and Tapas bars can be found between the Gran Via and Plaza Nueva, where affordable dining is plentiful. Spanish restaurants tend to use fairly basic ingredients from fresh, local produce, creating simple and yet extremely tasty meals. Local specialities in the city of Granada include paellas, tortillas (omelettes), a huge range of hot and cold soups (sopas), cold meats, pork and chicken-based kebabs (pinchos morunos), and various meat and vegetable stews, which include 'olla de San Antón' - with lima beans and pork, and 'olla podrida' - a mixture of lamb, chicken, pork, veal and ham. Fast-food restaurants are also available around Granada, for those looking for a quick snack.

Granada contains one of the highest ratios of restaurants and bars to people in the whole of Spain, so you can sure to find something that more than meets your dining requirements. At night time, some of Granada's restaurants offer a range of entertainment, such as Flamenco dancing, singing and dance floors. Nightlife in Granada is particularly lively and many of the best restaurants, dining venues and bars are concentrated around the Calle Gran Capitán and the Calle San Juan de Dios. These restaurants generally serve dinner from 20:00 onwards, although a number of dining options are available for those used to eating earlier.