Capital of the Granada province, the city of Granada resides within the autonomous community of Andalucia, on the southern side of Spain and alongside the Sierra Nevada mountain range. Dominated by the palace-like fortress named the Alhambra, this city is rarely crowded and has much appeal for tourists.

Both the Calle Reyes Católicos and the Gran Via de Colón are important thoroughfares in central Granada, intersecting at the Plaza Isabel La Católica. To the south-west is Pueta Real, while if you head in a north-easterly direction you will soon reach the Plaza Nueva.

From the Plaza Nueva, the Cuestra de Gomerez leads towards the Alhambra, with the Albayzin (Muslin district) being close by and spread over another hilltop.

The majority of the attractions within Granada can be reached on foot, with maps often proving to be a sensible addition to any bag or rucksack. However, there are plenty of buses on hand, if you'd rather save your energy and avoid the steep hills and slopes. 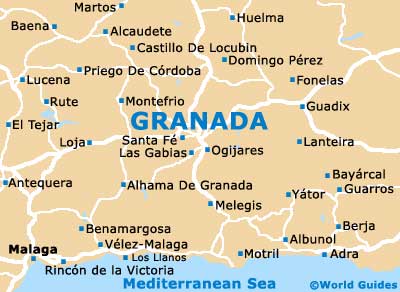