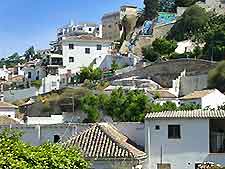 The city of Granada is famous throughout Spain for its hills of white-washed houses, historic buildings, mazes of narrow streets, spacious plazas and ancient Alhambra fortress, which comprises a number of palaces and gardens, and offers spectacular views of the Granada area.

Many tourists choose to visit Granada each year and the tourism industry here is thriving, with a wealth of travel tips available throughout the city, in numerous tourist information offices. The Internet is also a good source for both travel tips and cheap accommodation in Granada.


With a strong Moorish heritage and numerous historical remains around the city, many of Granada's buildings feature Mudéjar-style architecture and contrast with more contemporary structures nearby. Locals in Granada are friendly and always welcome visitors, with a fairly relaxed pace of life and plenty of celebrations throughout the year, including carnival parades, fiestas and parties. 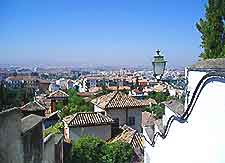 There are three main tourist information centres in the city of Granada, together with a good selection of kiosks and useful leaflets. Providing a range of attractions leaflets, maps of the area, travel tips and accommodation booking, the Provincial Tourist Office is located close to Puerta Real, and Granada's Regional Tourist Offices can be found along the Calle Santa Ana and at the Alhambra.

Also, with around 60,000 students located in and around Granada, there are a wealth of Internet and Cyber cafés throughout the city, providing extremely cheap hourly access and the perfect places to send holiday emails. 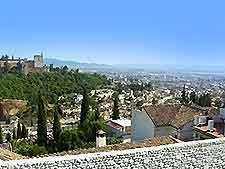 Tipping is quite discretionary in Granada, with taxi drivers usually being given a 5 to 10% tip or similar amount, although this is by no means imperative. Restaurants always include service charges by law, and these should be clearly displayed on all menus, although a small tip will still be expected and very much appreciated. Hotel staff, such as luggage handlers, happily accept a simple tip of just a Euro or two. Generally, no other public service workers in Granada expect to be tipped. 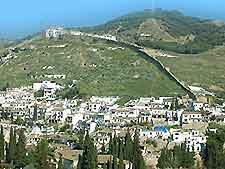 The national religion of Granada and throughout Spain is Roman Catholic, although many other faiths and major religions are also represented in Granada, including Protestants and Muslims, amongst others. There are many appealing chapels and churches that welcome visitors to the city and often hold services during the morning and evenings. Granada's most important church is the striking 16th-century Santa Maria Cathedral (Catedral de Santa Maria de la Encarnación), which dominates the city centre.

As from January 2006, many public buildings, offices and methods of public transport in Granada are now smoke-free, with rules restricting smoking and prominent no-smoking symbols, although some designated smoking areas may exist. Harsh fines are enforced for those found to be smoking in no-smoking zones, particularly where food is being served and in children's attractions. Smokers in Granada often choose to simply smoke outside, or where other people are already smoking.

As with all big cities in the world, one of the main threats in Granada is by bag snatchers and pickpockets. Be conscious of your belongings if people 'accidentally' bump into you or brush past, consider wearing bags across your body and wear discreet money belts. When parking cars in Granada, never leave valuables on show and if possible, use well-lit parking areas and hotel car parks.

VAT (IVA) is always included in the price and refunds are unusual in Granada and throughout Spain. Tourists visiting this busy city from countries outside of the EU may claim tax refunds when the item was bought for personal use and cost more than a certain amount. Shopkeepers in Granada will usually be able to provide further tax information if necessary.