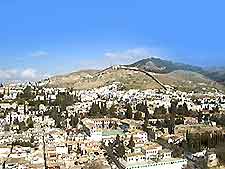 Granada lies on the southern side of Spain and is home to around 240,000 inhabitants, with much of Granada being divided into a number of recognisable districts and neighbourhoods. There are two major streets in central Granada, the Gran Via de Colón and the Calle Reyes Católicos, which both meet at Granada's Plaza Isabel La Católicos.

The Old Quarter of Granada, otherwise known as the Parte Vieja district, is the city's historic centre and is home to an impressive selection of shops and restaurants, together with the city's imposing cathedral. Nearby, the Realjo district of Granada has long been one of the most animated parts of the city, being home to an array of entertainment options and Tapas bars. Other districts in Granada worthy of a mention include El Albaicin - located across from the Alhambra, and the Sacromonte district - where you will find an authentic Spanish gypsy atmosphere. Here are Granada's main districts, neighborhoods and locations. 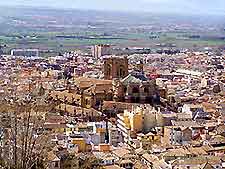 Granada's Old Quarter, often known locally as the Parte Vieja, was once the heart and soul of a bustling commercial centre. Now home to a large selection of shops, including local stores selling gifts, souvenirs and handicrafts, many of the area's best shops are clustered around the Calle Oficios, the Calle Alcaiceria and the Calle Zacatin. The nearby Plaza de Bib-Rambla is also worth a visit, with a number of top restaurants, boutiques and florists in the vicinity.

Much of the Old Quarter is dominated by the 16th-century Santa Maria Cathedral (Catedral de Santa Maria de la Encarnación), which stands off the Gran Via de Colón and is surrounded by an array of historical buildings, with views of the nearby Albayzin hills and the striking Moorish fortress of Alhambra.

Known for its friendly locals and relaxed atmosphere, Granada's Realjo district is a particularly lively part of the city. Containing part of the university complex, many students reside in this part of Granada and consequently a large number of bars, cafés and restaurants have appeared, including a selection of Tapas bars. With a good variety of local shops, public squares and gardens, and a thriving café-street culture, the Realjo district of Granada also features many historic stone houses, narrow alleyways and night time entertainment. 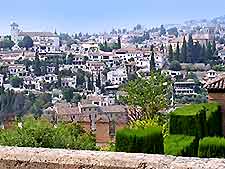 A particularly historic part of Granada, the Albayzin district has Arab origins and contains a number of notable buildings dating back to the 1500s. Edged by the Calle Caldereria Nueva, the Calle Elvira, the Calle Caldereria Vieja and the Calle Zenete, Granada's Albayzin district is based around a large hill, standing opposite the Alhambra. The Albayzin contains a large number of appealing speciality stores, together with popular fast-food outlets, cafés and coffee shops, al fresco dining, endless bars, and charming, spacious plazas.

A large proportion of the Albayzin area is situated on a hillside and contains a maze a cobblestone alleyways and narrow streets, lined with white-washed houses and often offering superb views of central Granada. On the northeastern side of the Albayzin district, you will find the Plaza Larga, a scenic square featuring a host of nearby restaurants, Tapas bars and terrace areas, together with a bustling Saturday market, where a range of local produce is sold. The Plaza de San Nicolas is located at Albaicin's highest point and offers panoramic views of both Granada and the nearby Alhambra fortress.

With a rich gypsy flavour and plenty of traditional Flamenco dancing, the Sacromonte district of Granada is close to the Durro River. Located on the eastern outskirts of Granada, the Sacromonte district still features cave houses, many of which are inhabited by local gypsies, particularly close to the far side of the ancient Moorish wall, with many attractions targeted specifically at tourists.

Nearby you will find an array of traditional restaurants and colourful bars, with many featuring live entertainment, particularly at night. An unusual use of some of the caves, many are transformed into discos, particularly at the weekends during the university season.

Other attractions in Granada's Sacromonte district include the Zambra Museum (Museo de la Zambra), which celebrates the 'Caves of the Gypsies' and is known locally as the Las Cuevas del Sacromonte, and the Sacromonte Abbey, which dates back to the 1600s. Some of the best views of Granada can be found at the top of the Sacromonte area, which features an elevated position.