Getting Around, Trieste Travel, Transport and Car Rental 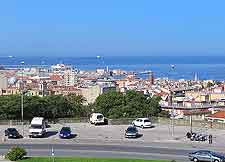 Trieste's layout means that the city can be explored quite comfortably on foot. Alternatively, for those who prefer not to walk, the public transport services available in Trieste travel to most attractions within the city. Indeed, city tours operate reasonably priced transport on a regular basis during the summer months and this provides a good opportunity to travel around and see all that the city has to offer.

Hiring a car is a popular method of travelling outside of Trieste and into the surrounding countryside. If you're planning to take a day trip into neighbouring Slovenia and Croatia, however, don't forget to check that the hire company allows this.

Address: Via Aquileia, 46, Ronchi del Legionari. Gorizia, Trieste, Italy, IT
Trieste has its own airport, the Friuli Venezia Giulia Airport, which is also known as the Ronchi dei Legionari Airport. Situated some 33 km / 21 miles from Trieste, the airport offers airline connections to the major Italian cities, such as Rome, Genoa and Milan. Flights also travel to some international cities, including London and Munich. Regular transport services run between the airport and the centre of Trieste. These include a shuttle bus, and a number of public bus routes. Taxis are also available, as well as car hire facilities. Alternatively, nearby Venice International Airport operates a large selection of international flights. 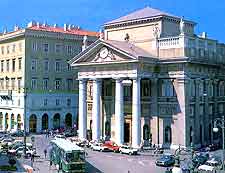 Train travel in and around Trieste is fairly straightforward if you're heading for a national or international destination. Trieste is accessible by train from Venice in two hours, and from Vienna in around 12 hours. Eurostar train transport operates from Milan and Rome. Trieste's main train station, the Stazione di Trieste Centrale, is located at Piazza Libertà. 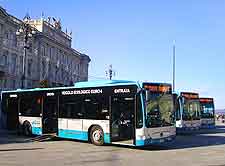 Buses are an inexpensive way of getting out and about in the area surrounding Trieste. Bus transport travels between Trieste, Udine, Venice, Padova and Grado. They also operate into nearby Croatia and Slovenia. The bus station in Trieste is situated next to the central train station.

A comprehensive bus network also transports passengers all over the city itself. Even during the night, a number of routes continue to operate. Tickets should be purchased in advance of travel. 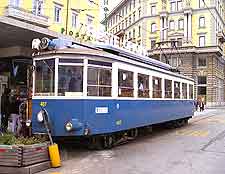 A funicular railway transports visitors up to Il Carso. This popular tramway, built in 1902, departs from Piazza Oberdan in the centre of Trieste and offers exceptional city views during its short journey.

Trieste's taxis can be either hailed in the street or, alternatively, reserved in advance. However, it's worth noting that taxi transport is quite an expensive of travelling around the city centre.

Ferry boats run regularly travel between Trieste and Greece, and these are always popular with tourists. Visitors should allow up to 30 hours for the sea crossing.