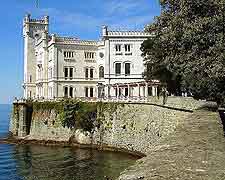 When it comes to landmarks and significant monuments, Trieste is dominated as much by the hill which overlooks the city as by the harbour, which was originally the source of the city's fame and fortune.

There is no shortage of interesting monuments and landmarks to explore during your stay in Trieste.

These include the remnants of Trieste's ancient Roman occupation, as well as its more modern grand squares and other architectural monuments, such as the Canal Grande. 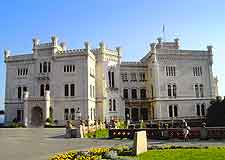 Address: Viale Miramare, Trieste, IT-34136, Italy, IT
Tel: +39 040 224 143
This beautiful castle is one of the most striking and eye-catching landmarks in this part of Italy and the Castello di Miramare enjoys a stunning waterfront location, where it really is hard to miss. Apart from the bright white facade and the interesting period contents, the Miramare Castle is also home to some exceptional landscaped gardens within its surrounding park, which covers more than 50 acres / 20 hectares.
Open hours: daily - 09:00 to 19:00
Admission: charge 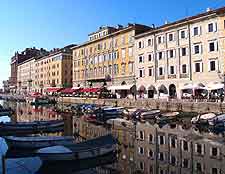 Bordered on either side by Via Rossini and Via Bellini, the Canal Grande marks the most northern point of Trieste's harbour.

This landmark construction is a pretty place to enjoy a stroll whilst watching the comings and goings of the small motorboats which line its banks.
Open hours: daily
Admission: free 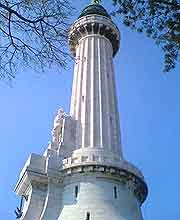 Address: Strada del Friuli, Trieste, Italy, IT
Tel: +39 040 410 461
There are some 200 steps to be climbed before visitors can reach the top of Trieste's restored Victory Lighthouse, the Faro della Vittoria. The reward for those who make the effort is a panoramic view over the Gulf of Trieste and coastline, as well as the city. The lighthouse is a much-loved local landmark and was built shortly after World War One, in memory of soldiers lost during the conflict. The Faro della Vittoria's main features include a copper statue of Victory, which sits on top of a bronze dome.
Open hours: check in advance for opening hours
Admission: free 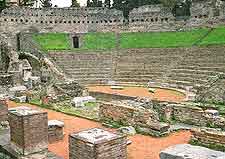 Trieste has an interesting Roman amphitheatre, which dates back as far as the 1st century AD. Facing the sea, this landmark stone theatre takes advantage of the natural incline. A number of statues which once decorated this monument were discovered in the 1930s. These can now be found within the City Museum.
Open hours: daily
Admission: free 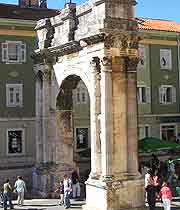 Address: Piazzetta Barbacan, Trieste, Italy, IT
A short distance from the Piazza dell'Unità d'Italia, in Trieste's Old Town, is an archway which is said to date back to 33 BC. This ornate monument is, in fact, the only surviving gateway in the Roman city walls.
Open hours: daily
Admission: free

One of the city's best-known landmarks, take a trip up this hill in Trieste and you will be rewarded with great panoramic views over the city. At the top, visitors can also pay a visit to the San Giusto Cathedral and an impressive 15th-century castle.
Open hours: daily
Admission: free 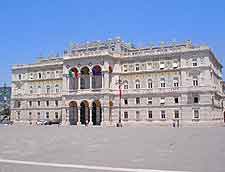 The Piazza dell'Unità d'Italia's central position in Trieste makes this one of the first ports of call for most visitors to the city. This vast square is home to an array of grand buildings and palaces, including the Town Hall. One side of the square also runs right up to the city's seafront. Evening time is perhaps the most atmospheric time to visit, when the waterfront is beautifully illuminated.
Open hours: daily
Admission: free