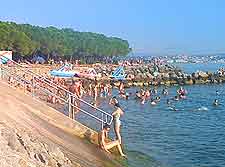 Trieste is becoming increasingly popular as a tourist destination. Certainly, it's rich cultural heritage provides visitors with plenty to see and do, with an appealing selection of attractions on offer to everyone.

Some of Trieste's top tourist attractions can be found on the hill which dominates the city, and also around the medieval quarter below. Other 'must-see' attractions include an aquarium and spa, both of which provide great entertainment for the whole family. Together, they make Trieste a pleasant place to while away a few days or more. 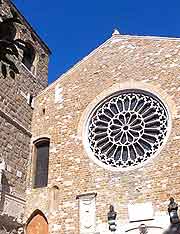 Address: Piazza della Cattedrale 3, Trieste, Italy, IT
Tel: +39 040 302 874
The distinctive sandstone facade of Trieste's cathedral was built in the 14th century and is dedicated to St Just. As well as Byzantine mosaics, the cathedral's interior boasts a chapel, which is said to date back to the 13th century. Members of the Spanish Bourbon dynasty are buried in the cathedral's crypt. Locals refer to this attraction as the Cattedrale di San Giusto.
Open hours: daily - 07:30 to 19:00
Admission: free

Tel: +39 040 225 290
After a day's sightseeing in Trieste's Old Town, a visit to the Mariano Temple of Monte Grisa makes for a strange sight. This triangular-shaped church is known by the locals in Trieste as the 'little cheese'. Situated on Il Carso, a short distance from the city, breathtaking views combine with an extraordinary building. Constructed in 1945 and consecrated in 1966, the attractions of the Mariano Temple have resulted in this becoming a particularly popular destination for pilgrims.
Open hours: daily - 09:00 to 19:00
Admission: free 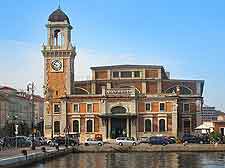 Address: Riva Nazario Sauro 1, Trieste, Italy, IT
Tel: +39 040 306 201
The city aquarium is a popular place for families to visit during their stay in Trieste. This aquarium is still housed within its rather grand, original 1930's building. Here, tourists can look out for many marine attractions and creatures, including molluscs and crustaceans, as well as penguins, reptiles, turtles and fish.
Open hours: Tuesday to Sunday, April to October - 09:00 to 19:00; November to March - 09:00 to 13:00
Admission: charge 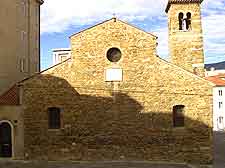 Address: Piazza San Silvestro 1, Trieste, Italy, IT
Tel: +39 040 632 770
The city's oldest basilica stands atop Trieste's landmark hill, the Colle Capitolino. Whilst the building has been subject to numerous makeovers through the centuries, it's still possible to see remnants of the frescoes that once decorated the church. The church was closed in the 18th century and is now a national monument belonging to the Valdese community.
Open hours: Thursday and Saturday - 10:00 to 12:00
Admission: free

Address: Riva Traiana 1, Trieste, Italy, IT
Tel: +39 040 363 952
L'Ausonia is one of Trieste's longest-serving spa centres. Facilities include a sea-water swimming pool, as well as a bar, children's area and solarium. As you'd expect, the centre is very popular with families, particularly during the summer holidays.
Open hours: daily, April to October - 08:00 to 19:00
Admission: charge