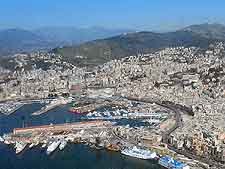 Although first impressions of Genoa (Genova) may not always be the most favourable, the charm of this seaport city soon becomes apparent when properly explored. The very heart of Genoa's Old Town area is a good place to walk around and boasts a series of narrow alleyways (caruggi), ancient churches and Renaissance-style palaces.

The Piazza de Ferrari has become an important part of Genoa and this large public square is bordered by many leading sights and tourism opportunities, such as the 14th-century Palace of the Doges (Palazzo Ducale). Also worthy of investigation is the renovated harbour area itself (Area del Porto Antico), along with the easterly Boccadasse neighbourhood and its many fishing boats, next to the Corso Italia. 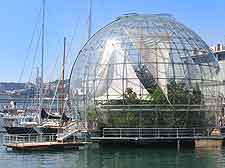 Many magical sights are to be found all over Genoa and in particular around its central squares, such as the Piazza San Lorenzo, where nothing is really quite as breathtaking as your first glimpse of the Cattedrale di San Lorenzo, the city's beautiful 12th-century cathedral. Tourists will also appreciate a visit to the Casa della Famiglia Colombo, once the home of famous explorer Christopher Colombus. For families, the dome-shaped Biosfera greenhouse is always popular, along with the Genoa Aquarium (Acquario), where dolphins are just one of the many highlights. More information about Genoa Tourist Attractions. 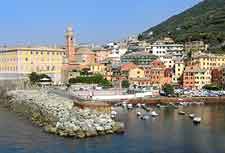 Dominating the area, Genoa's Porto Antico (Old Port) has recently had new life breathed into it and is now a particularly lively spot, filled with waterfront shops and eateries. Other prominent city landmarks include the nearby Palazzo Reale on the Via Balbi, and also the grand Forte Sperone, a historic fortress built in the middle of the 18th century to protect the city. The Forte Sperone is worth visiting for the views alone, which stretch for miles. More information about Genoa Landmarks. 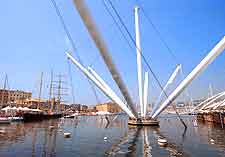 If history and culture are your bag, then Genoa won't disappoint, being home to many quality museums offering plenty of information about the past. Both the Museo Palazzo Rosso (Red Palace) and the Museo Palazzo Bianco (White Palace) feature exceptional collections of paintings, which date as far back as the 12th century and include works by artists such as Castiglione and Van Dyck. Within the Castello d'Albertis, the Museum of World Cultures (Museo delle Culturo del Mondo) is home to a wealth of information about pre-Columbian Latin America, while nothing can be more surprising than actually seeing the silver platter on which the head of John the Baptist was once served up, displayed as the Museo del Tesoro. More information about Genoa Museums and Genoa Art Galleries. 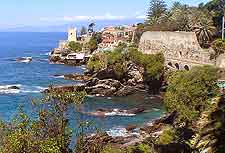 Liguria is a particularly beautiful part of Italy and this region is home to many appealing towns, villages and resorts, all of which are near to Genoa and popular with tourists. Once a quiet fishing village, Portofino has grown into a leading seaside resort and regularly attracts the rich and famous, while to the east of Genoa, Varazze also enjoys a picturesque setting on the coastline and features a long promenade and lively marina area, being especially popular during its mild winter months. Many beaches are also to be found around the neighbouring town of Nervi, home of the Villa Grimaldi Park. More information about Genoa Attractions Nearby.