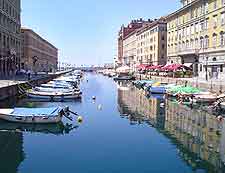 According to legend, Jason and the Argonauts landed here in Trieste, on their quest for the Golden Fleece. Antenore and Diomedes were also said to have landed here during the battle for Troy.

Legend aside, history knows for sure that the Romans arrived around 177 BC and established a colony here. Under Roman rule, Trieste flourished, both commercially and architecturally. At this time, it was known as Tergeste.

With the fall of the Roman Empire from the 5th century AD, Trieste became a Byzantine military camp. Under Byzantine rule, it fell victim to frequent Barbarian invasions, including those instigated by the Longobards and the Franks.


History from Medieval Times to the Habsburgs

By the Middle Ages, the city had become an important port and a free commune. Finally, after some 200 years of wars against the neighbouring Republic of Vienna, Trieste petitioned Leopold III von Habsburg, the Duke of Austria, for the city to become part of his empire. From October 1382, the histories of Trieste and the Habsburg Empire became inextricably linked.

In the 17th and 18th centuries, Trieste developed into a busy port and trading city. Emperor Charles VI granted it tax-free status. The city continued to flourish under Maria Theresa of Austria. A deeper port was constructed, leading to a flood of entrepreneurs and merchants from all over Europe. The inhabitants of Trieste also enjoyed a good measure of religious tolerance and its various religious communities could worship openly.

When the Napoleonic Wars arrived, Trieste was occupied by the French on no fewer than three occasions. Later, it was annexed by Napoleon to the Illyrian Province. During this period, the city not only lost its independence, but also its status as a free port was disrupted. After the wars had ended, Trieste returned to the Austrian fold. It became the capital of Austiran 'Kustenland'.

By the end of 19th-century history, Trieste had expanded considerably. Many large shipping companies chose to set up their shipyards here. The arrival of new industries also attracted immigrants into the city, which became increasingly multicultural. 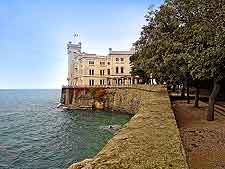 At the beginning of the 20th century, the city became the haunt of many influential writers, including James Joyce. With its Viennese architecture and coffee houses, it was known as the 'Austrian Riviera'. At the end of World War One, the Austro-Hungarian Empire disintegrated and Trieste became part of Italy.

From September 1943, the city was governed by Mussolini's regime. During World War Two, Italian anti-fascists in the city incited a revolt against the German Nazi regime. Trieste was invaded by Yugoslavian soldiers under the leadership of Tito, and German forces capitulated. In June 1945, the Western Allies succeeded in pressurizing the Yugoslavs, who were forced to withdraw. In October 1954, the city returned to Italian control.

Trieste is the capital of the Friuli-Venezia Giulia region and has its own special constitution, granted by the Italian government. Today, it is well known for its scientific research. Indeed, it is known as Italy's 'Town of Science'.