Trieste Weather, When to Go and Climate Information 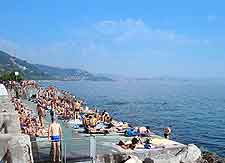 Located between the Adriatic Sea in the south and mountains to the north, Trieste enjoys a climate that is quite different from other parts of northern Italy.

Visitors can expect Mediterranean-style weather in the summer, with plenty of sunshine and high temperatures, as well as mild winters. Trieste does experience a fair amount of rainfall throughout the year, so both summer and winter visitors should come prepared with appropriate wet weather gear. 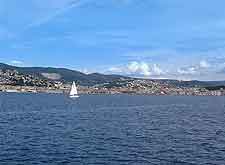 Springtime in Trieste brings with it a relatively mild climate. It's worth remembering that March and April can experience a fair amount of rainy weather. However, from May onwards, temperatures can reach around 20°C / 68°F, which means that it is sometimes mild enough for visitors to be able to comfortably swim in the sea.

Summers in Trieste are hot and fairly sunny, with an average daytime temperature of 26°C / 79°F. There are usually around nine hours of sunshine a day in July and August, so it's worth packing some sunscreen in anticipation of the fine weather and clear skies. Hot temperatures are usually tempered by a cooling summer breeze, making the climate feel quite comfortable. Evening summer temperatures in Trieste are generally pleasant enough to be able to dine al fresco. However, the odd summer thunderstorm can sometimes break up the sunshine during the summer.

Trieste enjoys quite a mild autumn climate, with temperatures averaging around 21°C / 70°F. This means that it's often warm enough to continue swimming in the sea right through until October. Rainfall tends to increase at the end of October and during November.

The winter weather and climate in Trieste is quite mild compared to other parts of northern Italy. As a result, fog, frost and snow are experienced only infrequently. Look out for the 'bora', the equivalent of the French mistral, a strong wind which brings blustery and rather cold weather to the city. Temperatures in Trieste tend to stay around 6°C / 43°F during mid-winter.