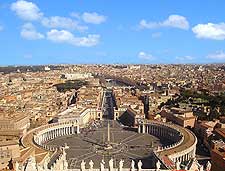 Cities don't come much more ancient, impressive or chaotic than the Italian capital of Rome. Visitors have been coming to this historic tourist destination for over 25 centuries and this 'Eternal City' contains more sights than you could possibly ever see during one holiday. Therefore it makes sense to prioritise, visit your chosen tourist attractions and then simply relax, soaking up the vibrant Italian atmosphere present in this capital whilst perhaps enjoying a coffee on one of the numerous spacious plazas.

Tourism is big business in Rome and the city is divided into a series of distinct neighbourhoods, each of which has its own character. Located in the very heart of the city, the aptly named Modern Centre is where much of the accommodation and dining scene is based, often lining the Via Veneto. Old Rome and the Colosseo form the old heart of the city and this small area is generally referred to as the 'Centro Storico' (Historic Centre). 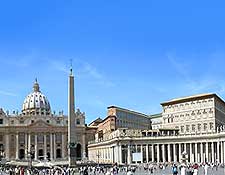 The Papal city state of the Vatican lies on the western side of Rome, together with the cobblestone alleyways of Trastevere, while the sizeable northern section is named the North Centre and is home to sights such as the famous Spanish Steps (Scalinata di Spagna).

Whilst it is true to say that Rome is certainly a spreading and sizeable city, much of the sightseeing is clustered within the Centro Storico, to the east of the Tiber River and west of the Stazione Termini. Located next to the Piazza Cinquecento, the Stazione Termini is the city's principal transport hub, where many cheap hotels now reside. Your best way of navigating this area is simply on foot, bearing in mind the location of the principal landmarks. Pocket-sized 'Roma' maps of the city are provided by the Rome Tourist Board and will certainly help you get around, being available at the popular tourist information kiosk on the Via Parigi. Further tourism outlets are based at the Villa Borghese, on the Via Marghera, on the Piazza della Minerva and on the Piazza Colonna, next to the Palazzo Chigi. 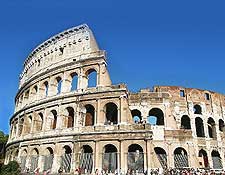 The city comes with a very reasonable selection of hotels, with Rome accommodation including almost 1,000 B&Bs, as well as plenty of hotel chains, a number of hostels and numerous pensioni (traditional guest houses). Prices tend to remain high, although the actual quality is certainly variable and it is worth checking genuine reviews before booking ahead. A comprehensive selection of budget options can be found scattered around the Stazione Termini, with a noticeable improvement in standards being offered in the extremely desirable Centro Storico and Trastevere areas, where you can really immerse yourself in the history of the city. Reasonably priced Rome apartments provide a good alternative to hotels and suit families, although if you are on a tight budget, then you may well like to consider one of the camping sites based within the suburbs. 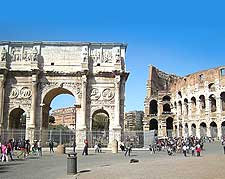 Those who prefer the idea of the independence and space that Rome apartments offer during long stays should choose the location carefully. Flats overlooking the Tiber River may well be in demand, but these appealing views do come at a price. Similarly, accommodation around the Villa Borghese gardens and the Vatican city is also pricey, with guest houses surrounding the Sapienza Università di Roma (Sapienza University) being much more affordable and in plentiful supply.

A summer holiday in Rome will likely be a hot one and this time of the year sees some rather high temperatures, making sightseeing uncomfortable during the heat of the day. Late spring is certainly a preferable time to visit if possible, when days are still warm and sunny, without being oppressively hot. If you intend to begin your visit with some simple sightseeing, then the Mouth of Truth (Bocca della Verità) on the Piazza Santa Maria is a must-see, as is the Piazza del Campidoglio at Capitoline Hill and the world-famous Trevi Fountain (Fontana di Trevi) on the Piazza di Trevi. The Piazza Navona, the Forum of Augustus and the Circus Maximus (Circo Massimo) are all well worth checking out, the latter of which once played host to dramatic gladiator fights in front of crowds numbering tens of thousands. Those heading to the Vatican will find that the basilica at St. Peter's Square (Piazza San Pietro) is quite a sight. More information about Rome Tourist Attractions. 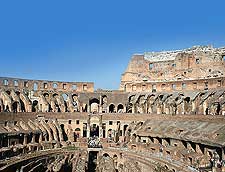 Tourists based in the city centre and planning a full day of serious exploration will likely first head to the Roman Forum (Foro Romano), which from the Piazza Cinquecento is best reached along the Via Cavour. These dramatic rectangular ruins feature a series of leading government buildings in the heart of the city, centred around an old marketplace between the hills of Capitoline and Palatine. The earliest surviving structures began their lives towards the end of the 5th century, when the Temple of Castor and Pollux was erected as a monument for the victorious Battle of Lake Regillus - three of its original columns are still standing in their entirety today. 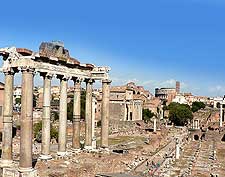 Dating back just under 2,000 years, the centrally located Colosseum (Colosseo) is yet another of Rome's most famous sights and this epic elliptical amphitheatre lies directly to the east of the Roman Forum, being capable of accommodating a staggering 50,000 spectators in its heyday. A visit to the Palazzo Farnese should not be missed and this magnificent Renaissance palace was built in the early 16th century, with none-other than Michelangelo assisting with the overall design. Dominating the Piazza della Rotonda, the Pantheon was erected as long ago as 126 AD, replacing an even older Pantheon from 27 BC. More information about Rome Landmarks and Monuments. 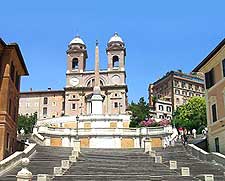 Rome celebrates its lengthy history at every opportunity and the sheer quantity of museums clearly demonstrates the city's commitment to documenting and preserving its past for future generations. The Capitoline Museums (Musei Capitolini) showcase the best of the city's archaeology and art, with this complex being based on the Piazza del Campidoglio and spread within three grand buildings - the Palazzo dei Conservatori, the Palazzo Nuovo and the Palazzo Senatorio. At the Castel Sant' Angelo (Holy Angel Castle), visitors can expect to find information relating to the great Roman Emperor Hadrian, and this ancient structure actually serves as a mausoleum for Hadrian (76 to 138 AD) and his family. Both the Palazzo Altemps and the Palazzo Venezia have plenty to offer, displaying many local relics, while for lovers of fine art, the Borghese Gallery (Casino Borghese) and the National Gallery of Modern Art (Galleria Nazionale d'Arte Moderna) come highly recommended, amongst others. More information about Rome Museums and Rome Art Galleries. 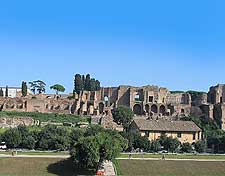 Whatever you decide to do during your time in Rome, you can be assured that there will always be plenty of choice. Many tourists leave a little time to properly explore the Lazio region, planning worthwhile excursions to destinations such as Lake Bracciano, the fascinating archeological site of Ostia Antica and the Castel Gandolfo, which functions as a summer holiday residence for the pope. An exceedingly popular day trip from Rome is the neighbouring town of Tivoli, located roughly 30 minutes away and home to the former Benedictine convent named the Villa d'Este, as well as the Villa Adriana (Hadrian's Villa). Comfortably reachable in under an hour is the town of Cerveteri, where the Necropolis of the Banditaccia is the principal draw card. More information about Rome Attractions Nearby.