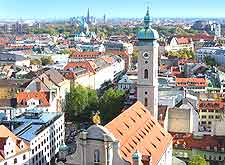 Full of traditional Bavarian character, the city of Munich, known locally as München, is the state capital and the country's third-biggest city. Central Munich is dominated by a number of historic buildings, including the Frauenkirche (Cathedral of Our Blessed Lady), and the eye-catching steeple of the Town Hall.

With some undeniably outstanding museums and cultural sights, Munich also offers some breathtaking architecture, an effervescent nightlife, acclaimed universities with more than 100,000 students, and some of the best festivals within the whole of Germany. The summer International Film Festivals and Opera Festival are true highlights, as is the Munich Oktoberfest. 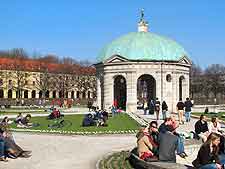 Munich has grown around the River Isar and the waterway has played an important part of the shaping of the city. Next to the Englischer Garten parkland (English Garden) it is even possible to surf on the river, with strong artificial waves providing good surfing conditions.

Various guided walking tours are available in Munich, including both the City Walk and Third Reich Tour. For information about these and tourism in general, the EuroAide Tourist Information Centre at the Hauptbahnhof (train station) is a good place to start your visit and also offers good discounts in the form of the Munich Welcome Card. 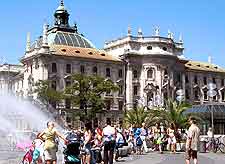 Tourists visiting Munich will find an almost bewildering selection of tourist attractions to choose from. Families will always enjoy a trip to the Münchener Tierpark Hellabrunn (Hellabrunn Zoo) and its 5,000+ animals, while the science attractions at the Forum der Technik are also extremely popular. For grown-ups, the regular concerts at both the Munich Nationaltheater (Bavarian State Opera House) and Gasteig (Carl-Orff-Saal Concert Hall) will undoubtedly be a highlight. Also popular are the many beer gardens lining the banks of the River Isar, the stunt shows at the Bavaria Filmgelände (Bavaria Film Studios), the crown jewels and antiquities at Residenz Palace, and the Viktualienmarkt, a historic local market, held in Munich for over 200 years. More information about Munich Tourist Attractions. 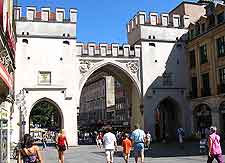 Full of character, many of the buildings in Munich are of historical significance. Both the Altes Rathaus (Old Town Hall) and the Neues Rathaus (New Town Hall) are two of the city's most prominent buildings, along with the Ludwig-Maximilians-Universität (Ludwig Maximilians University of Munich). Also worth a look, the Schloss Nymphenburg (Nymphenburg Palace) is especially famous and full of period furnishings and information about days gone by, while the Justizpalast (Munich Court House) and its Renaissance style architecture has also become a prominent local landmark. Particularly important, look out for the eye-catching 14th-century Isartor City Gate - the oldest of Munich's city gates; the Englischen Garten (English Garden) - complete with boating lake and surfing on the Isar River; the 15th-century Frauenkirche (Munich Cathedral) - known for its grand twin towers, and the Olympiapark (Olympic Park) - built for Munich's 1972 Olympic Games and dominated by its rather imposing Olympiaturm (Olympic Tower). More information about Munich Landmarks. 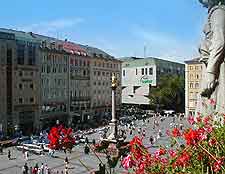 For a true taste of culture, Munich is where you will find some of Germany's best museums and galleries, which provide a mixture of enjoyable exhibits and educational information. Particularly popular, the Deutsches Museum (National Museum) was founded in 1906 and is home to a range of interactive scientific exhibits. Other highlights include the classic cars at the BMW Museum, the valuable and historic toys at the Spielzeugmuseum (Toy Museum), the dinosaur fossils at the Paläontologisches Museum (Paleontology Museum), information about the city's past at the Münchner Stadtmuseum (Munich Museum of Local History) and also the many paintings, both classical and contemporary, at the Alte Pinakothek, the Neue Pinakothek, and the Pinakothek der Moderne (Museum of Modern Art). More information about Munich Museums and Munich Art Galleries. 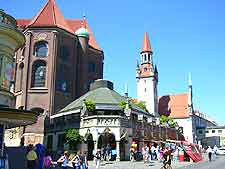 For those looking to explore the areas outside of Munich, plenty of tourist attractions can be found in nearby Dachau, a small town most famous for its magnificent 18th-century castle.

Also close to Munich, the town of Erding is home to an impressive thermal spa complex, a good zoo and a major annual jazz festival, while for others, the range of water sports and stunning scenery around Lake Starnberg are extremely tempting and worth investigating. More information about Munich Attractions Nearby.