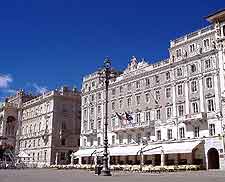 Trieste is a melting pot of cultures and traditions, and nowhere is this more evident than on restaurant menus in the city. When dining out in Trieste, the cuisine on offer ranges from typical Central European, to dishes which have a distinctly Slavic flavour, as well as traditional Italian fare.

Eating out is taken very seriously in Trieste, so there are plenty of dining options, including restaurants, family eateries and cafes. Choose from gourmet traditional cuisine to cheap and filling local dishes.

Most restaurants, trattorias and buffets in Trieste open at lunchtime and during the evening, from Monday to Saturday. A select few may open on Sundays or during the afternoon, although it's worth checking out opening hours in advance if you planning on heading to any particular establishment. 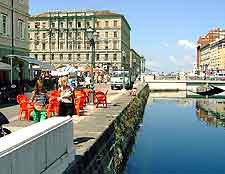 Traditional dishes in Trieste combine a variety of flavours and historic influences, including Austrian and Slavik traditions. As you'd expect from a coastal city, fish and seafood are both popular ingredients. Local dishes include fish soup, known as 'brodetto', as well as sardoni, or pilchards. Meat dishes include veal stew, sausages and sauerkrauat, and goulash.

Many of Trieste's sweet pastries and cakes have a distinctly Austrian flavour. These include strudel, Sacher cakes and chiffeletti biscuits. At Eastertime, keep a look out for 'pinza', a sort of sweet bread that is still cooked by bakeries in Trieste. 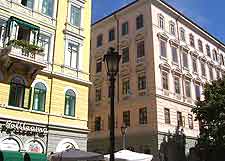 Its seaside location means that there plenty of there are plenty of seafood restaurants in Trieste. The problem may well be which to choose. As well as those in the city itself, it's also worth heading along the coast to Trieste's Faro area to enjoy great views for those dining out.

The restaurants and dining venues in Trieste also offer plenty of opportunities to sample other regional specialities on the menu. Gourmet diners are catered for by several upmarket restaurants. The most notable of these is the hotel restaurant belonging to the Grand Hotel Duchi d'Aosta. Diners in search of good-value, local cuisine will find restaurants and eateries scattered throughout Trieste. 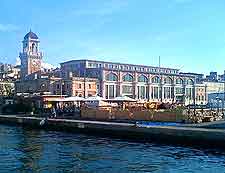 As well as the usual pizzerias and trattorias serving pasta dishes, Trieste also boasts traditional 'buffets'. Similar to the Italian osterias, which offer cheap, filling food in informal surroundings, visitors can expect to dine on meat-based dishes washed down by plenty of beer.

A visit to Trieste wouldn't be complete without dining in at least one of the city's cafes. Trieste has long enjoyed a love affair with coffee and continues to do so to this day. Several of Trieste's cafes have literary connections and were once the haunts of local and visiting writers. Best-known among them all is the Caffè degli Specchi on Piazza dell'Unità d'Italia, which is a good alternative to many top restaurants, although the San Marco on Via Cesare Batisti does come a close second.