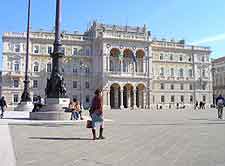 Although Trieste is a relatively small city, its many changes of ownership over the centuries have left the city with a rich heritage. Today, much of this is preserved in Trieste's many different and very interesting museums.

As well as several interesting civic museums, all maintained by the city authorities, Trieste boasts a number of smaller, privately-owned museums. Together, these cover everything from the history of Trieste as a seafaring city, to the life of James Joyce, one of its most famous visiting authors.

Address: Piazza Hortis 4, Trieste, IT-34123, Italy, IT
Tel: +39 040 301 821
This Natural History Museum contains everything related to flora and fauna, including stuffed animal exhibits and fossilized bones. This museum is known locally in Trieste as the Museo di Storia Naturale and actually dates back to the middle of the 19th century.
Open hours: Tuesday to Sunday - 08:30 to 13:30
Admission: charge, discount available for children

Address: Piazza Hortis 4, Trieste, Italy, IT
Tel: +39 040 675 8183
Situated within the Attilio Hortis' Public Library, this museum is a mine of information about the famous writer's books and his life in Trieste. James Augustine Aloysius Joyce arrived in Trieste in 1904 in search of work. He remained in the city until the outbreak of World War One.
Open hours: Monday to Friday - 10:00 to 12:00
Admission: free

Address: Via Guido Reni 2c, Trieste, Italy, IT
Tel: +39 040 306 770
The location of this unusual museum is in one of Trieste's old air-raid shelters, built into the hillside. It serves as the city's science museum and contains a variety of interesting exhibits, including a vivarium of cave animals and aquariums. The Speleovivarium is certainly one attraction for all of the family.
Open hours: Sunday, October to June - 10:00 to 12:00 (telephone in advance for guided group tour)
Admission: free

Address: Via Campo Marzio 5, Trieste, Italy, IT
Tel: +39 040 304 987
Trieste was once an important port with a thriving international trade. As you'd expect, the city boasts its own Museum of the Sea, which covers everything related to sea fishing and navigation. There's even a model of Elettra, the ship from which the first ever telegraphic message was sent. The collections at the Museo del Mare are thought to be among some of the richest in the Mediterranean.
Open hours: Tuesday to Sunday - 08:30 to 13:30
Admission: charge, discount available for children

Address: Via Fabio Severo, Trieste, Italy, IT
Tel: +39 040 301 821
This unusual museum is housed within the underground passageways that were built under Trieste during the World War Two and were used by German troops. Long forgotten, 'Little Berlin' is open to the public, although on a pre-booking basis only. However, a visit to this museum is well worth the effort if you have the time.
Open hours: telephone for advance reservations - suitable clothing required
Admission: charge