Getting Around, Mont Saint Michel Travel, Transport and Car Rental 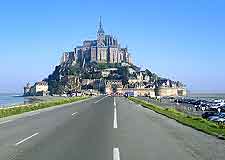 A small island surrounded by tall walls and linked by a long causeway, the only way to travel onto Mont Saint Michel is by foot. There is no transport of any description allowed on Mont Saint Michel, and so you will need to walk everywhere.

The island itself features two actual gateways, the Porte de l'Avancée is the main gateway that you will travel through as you arrive at the Mont and is located at the end of the causeway and onto the Grande Rue. Situated next to Porte de l'Avancée, the Porte Eschaugette is a secondary gate and used to a much lesser extent.


Bus transport links Mont Saint Michel with the neighbouring town of Pontorson, where many people choose to base themselves. However, do note that you should never try to approach the Mont from any other route other than the causeway, because the tide can come in at an alarming rate and soon cut you off on the mudflats completely - a situation easily avoided by using commonsense. 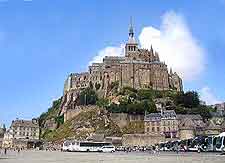 There are a number of airports close to Mont Saint Michel, for those wishing to fly into the region. Rennes Saint Jacques Airport is the closest to the island of Mont Saint Michel and this is an international air facility, with airlines such as Aer Lingus, Air France, Airlinair, Flybe and also Iberia Airlines. The main international destinations include Basel (Switzerland), Belfast (Northern Island), Dublin (Ireland), Edinburgh (Scotland), Exeter (England), Manchester (England), Newcastle (England) and Southampton (England). National French destinations connected by Rennes Saint Jacques include Bordeaux, Lyon, Montpellier, Nice, Strasbourg and also Toulouse. Airports close to Mont Saint Michel include: 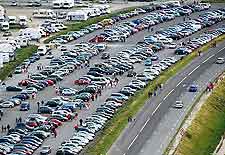 A number of major roads are close to Mont Saint Michel, such as the D976 (Boulevard du Général de Gaulle) to Pontorson and the A84 to both Caen (north-east) and Rennes (south).

Parking is reasonably priced and there are a number of large car parks close to the island and also within Pontorson. 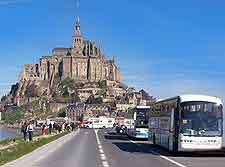 Mont Saint Michel is a small island and there is no actual bus transport on the island itself, although a number of different routes do regularly travel to the island's causeway. A large bus station is based at Rennes, next to the town's railway station. In addition, there are also a couple of regular buses, which travel from Mont Saint Michel to both Pontorson and St. Malo.

Although there is not actually any direct rail transport travelling between Mont Saint Michel and Paris, it is still quite possible to reach the island in this way. You can use high-speed TGV (Train à Grande Vitesse) trains from the Gare Montparnasse in Paris, and travel right down to the neighbouring town of Rennes. Bus transport is readily available at Rennes and is operated by Les Couriers Bretons, with a total journey time of approximately one and a half hours. Alternatively, there is a nearer railway station at Pontorson, which is a mere 15 minutes from the island of Mont Saint Michel and therefore extremely popular.

Being such a major coastal region on the north coast of France's Normandy district, a number of ferry services from England and Ireland regularly travel the route to the area and are conveniently close to Mont Saint Michel. The main ferry ports are located at Caen, Cherbourg, Dieppe and also Le Havre, all of which are within easy reach of the island by either road or rail.