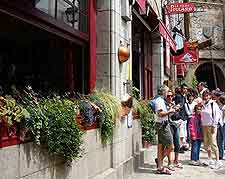 Visitors holidaying in the Mont Saint Michel area are often very surprised at how many hotels are actually located on the island itself, considering its size and compact nature, with the best often boasting glorious views of the coastline and tides movements. However, there are only eight hotels within the walls, which is nothing like enough to match the demand and accommodate the huge number of tourists who come here every year.

Those looking for accommodation on the island will find that most lodging options are predictably rather expensive, and during the busy summer months, guest rooms soon fill up. If you are prepared to shop around you will find that some hotels do offer a handful of cheaper guest rooms, although these are likely to be smaller, with less inspiring views. 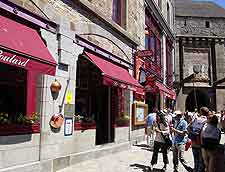 Without doubt, the most famous of all the hotels on Mont Saint Michel is La Mère Poulard, although its outstanding reputation is matched by almost extortionate room rates. With a past guest list including the former UK Prime Minister Margaret Thatcher, and even Soviet communist, Leon Trotsky, La Mère Poulard has quite a history.

As you move higher up the island, the hotels start to become more realistically priced, with the cheapest options including the Croix Blanche, the Du Guesclin and also the Mouton Blanc. Worth noting, some accommodation on Mont Saint Michel does close briefly in the quieter winter season, during the months of December and January. 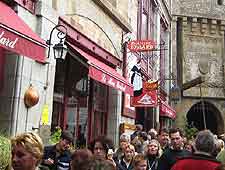 Although there is a reasonable selection of hotels on Mont Saint Michel, most visitors will find themselves staying in lodging at motels near to the end of the causeway, in Beauvoir, or within the neighbouring inland town of Pontorson, particularly around the Rue de Couesnon.

Accommodation in Pontorson is not especially inspiring, but it is considerably cheaper than on the island. Conveniently, Pontorson is connected to Mont Saint Michel by a regular, inexpensive bus service, and is also home to a train station (Gare SNCF). Budget travellers will find camping sites located within Pontorson (Camping Haliotis) and also at nearby Servon.