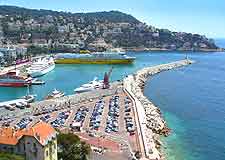 Nice, the capital of the Côte d'Azur is a truly cosmopolitan tourist destination. This part of the glorious French Riviera is the perfect resort for sun lovers, with many people choosing to relax along Nice's spectacular coastline during the sunny summer months and mild winters, where you are able to sunbathe, paddle in the azure sea, swim, waterski, parascend, jet-ski, or simply sip a smooth cocktail. Nice is home to many free stretches of beach and also a total of 15 private beach areas, referred to as 'plages concédées', where sun loungers can be hired for a nominal charge.

Many visitors staying in Nice enjoy a stroll along the Promenade des Anglais (Promenade of the English), which dates back almost 200 years and lines the city's Mediterranean coast at the Baie des Anges (Bay of Angels). Central to life within Nice, this legendary boulevard is better known as simply the 'Promenade' and stretches for around 6 km / 4 miles, featuring many bright blue chairs where you can sit, relax and enjoy superb sea views. 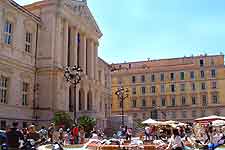 Tourists visiting Nice will find plenty of sightseeing opportunities all around the city. Many of these are historic and date from the 17th century, such as the magnificent Palais Lascaris, the Cathédrale de Sainte Réparate and the buildings of the Monastère Notre Dame de Cimiez. However, for many visitors, the legendary coastline is Nice's main tourist drawcard and in particular the polished pebbles of Neptune Beach are simply unmissable, along with its sun loungers, pedalos and children's play areas. Also of interest for tourists in Nice, look out for the Basilique Notre Dame, the Cathedrale Orthodoxe Russe St. Nicolas, and also the Phoenix Parc Floral de Nice, the city's main botanical gardens. More information about Nice Tourist Attractions. 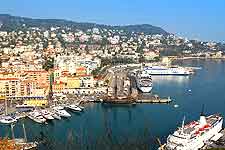 Many of the main tourist attractions around Nice are imposing landmarks in their own right, such as the 16th-century Fort du Mont Alban, which offers both impressive French military architecture and stunning views. Whilst not exactly historic, the Nice Acropolis dominates the area and is an eye-catching multimedia and conference centre. Also worth looking out for is the Old Port, a prominent reminder of its position as the French Riviera capital, being filled with swanky yachts and surrounded by a number of grand 18th-century buildings. More information about Nice Landmarks. 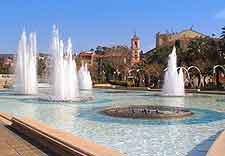 Culture abounds in Nice and the city boasts a number of good museums and popular art galleries. Highlights include the Musée de Palaeontologie Humaine Terra Amata (Museum of Human Palaeontology), the Musée d'Archéologie de Nice-Cimiez (Archaeological Museum) and also the Musée Départemental des Arts Asiatiques (Regional Museum of the Asian Arts), all of which are filled with well displayed exhibits and educational information. For art lovers in Nice, the Musée des Beaux Arts (Museum of Fine Arts) can be found along the Avenue des Baumettes, while the Musée d'Art Moderne et d'Art Contemporain (MAMAC) along the Avenue St. Jean Baptiste is full of international modern paintings and pop art. More information about Nice Museums and Nice Art Galleries. 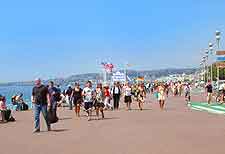 The coastline of Nice is full of tourist attractions, although nearby are a number of appealing Côte d'Azur towns and cities. Also close to Nice are many traditional Provençal villages, which are full of character. For high fashion and history, Monaco is full of sightseeing opportunities and regularly frequented by movie stars and celebrities, as is the neighbouring resort town of Cannes, particularly in May, when its world-famous film festival is held. More information about Nice Attractions Nearby.