Mont Saint Michel Weather, When to Go and Climate Information 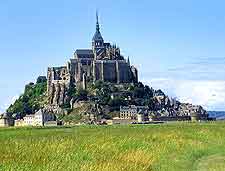 The weather around Mont Saint Michel and the Normandy region of France is fairly favourable, with a relatively mild winter climate soon warming up, month on month. However, although the winter months in Mont Saint Michel are mild and do see daytime temperatures of around 10°C / 50°F, the summer season is warm, but not hot or sticky.

The summer climate in Mont Saint Michel is in fact extremely pleasant and agreeable, with plenty of sunshine and temperatures most days staying just above 20°C / 68°F. Most tourists tend to visit the abbey during the summer and not only is this a good time to visit weather wise, but it is the only time of the year when every single attraction in the region is open. 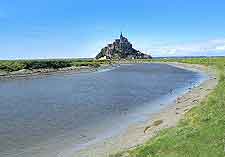 Being a relatively small island, the microclimates of Mont Saint Michel can vary greatly and are noticeably influenced by strong tides. Each year, the months of both March and also September tend to experience the very strongest tides, which can make accessing the island by car difficult at times, with some roads becoming flooded.

Spring and autumn are also popular times to visit Mont Saint Michel, when the climate is warm enough for most. May enjoys highs upwards of 16°C / 61°F, as does October. August is reliably the hottest month, with temperatures averaging around 21°C / 70°F. However, the very hottest, sunny weather can make thermometers climb a few degrees higher.