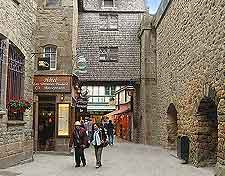 There are actually quite a few 'so-called' museums dotted along the Grande Rue (Rue Principale) on Mont Saint Michel. However, most are not really worthy of a mention, such as the rather strange Musée Grévin, although families with children may find that a couple are worth exploring.

The Archéoscope is one of the island's most popular museums on the Grande Rue, where the Archangel Michael offers an insightful history of the Mont, by means of a multimedia presentation, lasting approximately 20 minutes or so. The Musée de la Mer et de l'Ecologie (Maritime and Ecology) is another museum located on the Grande Rue and also of note, explaining the island's complex tidal movements and patterns, along with literally hundreds of models of ships and details about the huge project undertaken to counteract the problems encountered by 'silting'. 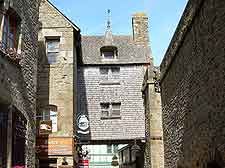 The Museum of History is one of the most popular cultural attractions on Mont Saint Michel and remains open throughout the year. As you would guess by its name, the museum provides much information about the history of the Mont, dating back some 1,000 years, when monks lived here, in their monastery.

As you take a stroll through the exhibits, you will encounter famous people from history, including past abbots and royalty, who have all been connected with Mont Saint Michel. You are even able to visit the gloomy prisons, where King Louis XI had many famous political prisoners placed behind its iron bars during the 15th century. Also well worth a visit on the Mont is the House of Du Guesclin (Quarters of Sir Bertrand Du Guesclin), a historical dwelling with an eclectic collection of antiquities and period furnishings.