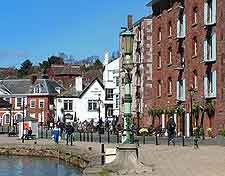 A famous university city close to the South Devon coastline, Exeter is a city of history, architecture, culture and recreation, with an abundance of shopping opportunities throw in for good measure. Tourism is now a big part of the city, with many visitors arriving to marvel at Exeter Cathedral's soaring twin Norman towers and spectacular uninterrupted vaulted ceiling, which is the longest in the world.

Exeter was actually founded by the Romans almost 2,000 years ago, although remains young at heart, thanks in no small part to its lively bars and nightspots, and its youthful student vibe. Today, visitors enjoy hanging out in the thoroughly revitalised quayside, where old warehouses have been transformed into trendy shops and restaurants. Tourist information at the Exeter quayside is available at the Quay House Visitor Centre, while in the city centre, an office outlet stands in the Civic Centre on Dix's Field, conveniently close to the Roman Walk and the Princesshay shopping centre. 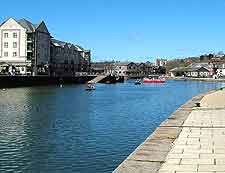 Guided walking tours around the city centre are popular with tourists and led by a team of experienced 'Red Coat' guides, who will take you to all of the main attractions and answer your questions along the way. You may also like to consider joining a tour of Exeter's surprising network of underground passages, which date from medieval times and were once filled with fresh drinking water. Visitors to the city will find numerous parks and green spaces in the city, such as the Belmont Park, the Northernhay Gardens and the Rougemont Gardens. Sited on the outskirts of Exeter and very much targeted at families, the Crealy Great Adventure Park comes with exhilarating roller coasters and exciting fast rides. Tourists looking for something a little more traditional and historic may like to visit the Grade II listed Cricklepit Mill, and also perhaps The House That Moved, which literally did just that when it was relocated to its current position on West Street in 1961. More information about Exeter Tourist Attractions. 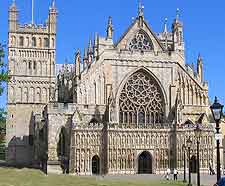 Exeter has retained much of its medieval character, which is suggested by the encircling remains of the once grand stone city walls. The crowning glory of the city is Exeter Cathedral itself, a 13th-century church with elegant architecture and imposing proportions. However, there is certainly much more to Exeter than simply its cathedral, with other important landmarks including the Guildhall, Rougemont Castle, the St. Nicholas Priory and Tuckers Hall. The Custom House next to the quayside also warrants a mention, since this handsome 17th-century brick building is the oldest that the city has to offer. More information about Exeter Landmarks and Monuments. 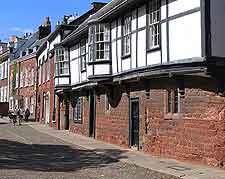 The recently renovated Royal Albert Memorial Museum and Art Gallery is the principal cultural attraction in the city and contains in-depth information relating to Exeter's history and industrial heritage. Further artefacts and relics form part of the university's impressive archaeology collection, where the Bill Douglas Cinema Museum (formerly Bill Douglas Centre for the History of Cinema and Popular Culture) is also based, together with a truly outstanding Sculpture Walk. Close by and located in the suburbs, the Topsham Museum is packed with local maritime information and fondly remembers the shipyards lining the River Exe. For art appreciation, check out the Artspace venue on Castle Street, the Phoenix Arts and Media centre on the cobbled Gandy Street, and the publicly funded Spacex Gallery on Preston Street. More information about Exeter Museums and Exeter Art Galleries. 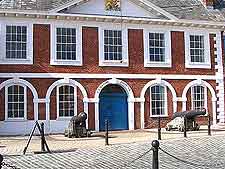 Close to Exeter are a whole world of additional Devonshire attractions, which lend themselves to enjoyable excursions and days out. During the sunny summer months, many tourists choose to spend some time at one of the nearby beaches in the Jurassic Coast World Heritage Site area, such as Budleigh Salterton, Dawlish Warren, Exmouth, Seaton, Shaldon, Sidmouth and Teignmouth. Also close to Exeter are the seaside villages of Beer and Branscombe, as well as the Torbay towns of Brixham, Torquay and Paignton, the latter of which is home to one of the largest zoological gardens in the UK. East Devon is a haven for walking, and there are a number of walking trails in this area, including the South West Coast Path, the East Devon Way and the endless pathways within the neighbouring Dartmoor National Park. Lyme Regis, Plymouth and Weymouth are all also within reach of Exeter, while further afield and to the east is Bournemouth, Poole and Swanage. More information about Exeter Attractions Nearby.