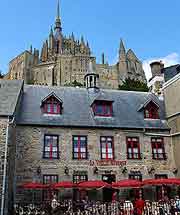 There are plenty of restaurants scattered around Mont Saint Michel, to satisfy the taste buds of hungry tourists. The main street (Grande Rue) is where you will find the largest number of dining options and around the Old Town, beneath the abbey.

These tend to serve hearty Normandy influenced French cuisine. Fluffy, light omelettes are a particular speciality on the island, as is 'saltmarsh' lamb, since a large number of lambs roam freely around the coastline.

Although these restaurants can be a little pricey, with fairly mediocre offerings aimed solely at the healthy tourist market on Mont Saint Michel, the views are often quite special. 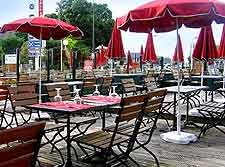 Cafes and similar dining venues soon fill up at lunchtimes and during the busy summer season, you may well have to wait for a table to become available. Often at the busiest times, it is fair to say that the quality of food at Mont Saint Michel's restaurants can suffer a little.

One of the best restaurants on Mont Saint Michel is the Du Guesclin, which resides on the ramparts and boasts exceptional sea views from its window tables and terrace. As well as omelettes, oysters are another favourite dish at this dining venue. The savoury crepes at the Creperie La Siréne make for a good budget option, although the tasty soufflé omelettes at La Mère Poulard on the Grande Rue are a bit on the pricey side. Some good hotel restaurants are situated just a few kilometres to the south of the island, in the nearby town of Pontorson, on roads such as the Rue Libération and the Rue Couesnon.