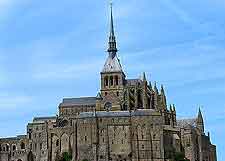 The abbey is without a shadow of a doubt the number one attraction and landmark on Mont Saint Michel and this historical structure crowds the island, being visible from literally miles away. Mont Saint Michel Abbey is located at the top of the Grande Rue and can also be accessed by a steep and winding staircase.

The island's historical abbey is known to date back as long ago as the early 8th century, when it was a small monastery built after the archangel Michael instructed the Bishop of Avranches (St. Aubert) to do so. During the 11th century and the Norman conquest, the Mont Saint Michel Abbey was greatly enlarged and the facade became distinctly Norman in its appearance. 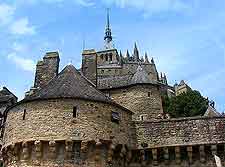 Tel: +33 02 3389 8000
Each year, literally thousands of people come to the mount to marvel at the ancient abbey and enjoy the scenic views, as they climb the 'Grand Degré' stairway to the entrance. Now listed as a UNESCO World Heritage Site and the inspiration for a number of similar island structures, such as St. Michael's Mount in Penzance, Cornwall (England), the Mont Saint Michel Abbey comprises a number of different elements. These include the: 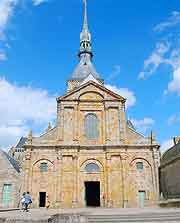 Building the Mont Saint Michel Abbey more than 1,000 years ago was no small feat and the huge amount of masonry required was brought to the island by boat. The heavy stone was then pulled up the actual hillside by a series of ropes, powered by prisoners walking on a medieval treadmill contraption.

Those wishing to climb up the Lace Staircase (Escalier de Dentelle) to the rooftop of the abbey church will be greeted by some spectacular coastal views, and to reach this actual part of the island, you will climb a series of staircases and no less than 900 steps.
Open hours: daily, May to September - 09:30 to 19:00; October to April - 09:30 to 18:00
Admission: charge, discounts for children aged 18 and under, extra charge for audio guide