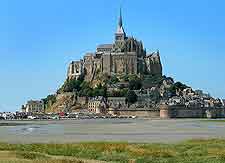 Perched high on a rock that lies just off the Normandy coast, Mont Saint Michel has a fascinating history. According to Celtic mythology, the island was a sea tomb for the souls of the dead.

The island's story starts in 709 AD with Bishop Aubert of Avranches. The legend goes that the archangel Michael kept appearing in the bishop's dreams. Michael begged him to build a church on the barren rock known then as Mont Tombe. While the bishop initially had his doubts, he was eventually persuaded to build an oratory on the top of Mont Saint Michel.

In 966 AD, Richard I, Duke of Normandy, gave the island to the Benedictine monks under Abbot Maynard. The monks fostered the cult of St. Michael. Around 1017, a Romanesque abbey was built here. Designed by William de Volpiano, an Italian architect, the abbey church featured numerous underground crypts and chapels. The island was to become a centre of religious learning.


In the 12th and early 13th centuries, additions were made to the abbey buildings, including a Gothic-style cloister and refectory. Military defences were also built to protect the island against attack.

Throughout the Middle Ages, monks and pilgrims flocked to the island of Mont Saint Michel. Many were on their way to pilgrim sites further south. For others, this was their sole destination. It's said that, at that time, large numbers of miracles were witnessed here.

Mont Saint Michel from the 15th to the 18th Century

During the Hundred Years' War, Mont Saint Michel was blockaded by the English on no fewer than three occasions. The abbey stood up to each of these assaults and was the only place in this part of north-western France that did not fall into English hands. Despite the disruption that beset the island at this time, it remained an important place of pilgrimage and one of France's most significant shrines.

The island's heroic resistance to the English assault also gave hope to those who were loyal to the French king. It is thought that Jeanne d'Arc (Joan of Arc) was particularly influenced by the story. In 1450, at the Battle of Formigny, Charles VII finally succeeded in defeating the English. 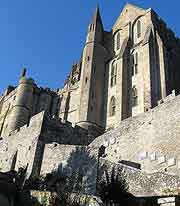 By the time of the French Revolution, the influence of the abbey as a centre of pilgrimage had diminished and so too had its wealth. Indeed, at this point in its history, there were hardly any monks living on Mont Saint Michel. In 1793, the abbey was converted into a prison and, at first, opponents to the Republican régime were held here.

During the early 19th century, there were campaigns that called for the restoration of what was seen as a national treasure. One of these had Victor Hugo as a prominent supporter. In 1874, the abbey was handed over to the French government with the aim of preserving it for future generations. At the end of the 19th century, a causeway was built so that the island could be more easily accessed at low tide. In 1895, a copper statue of St. Michael was commissioned to adorn the abbey's spire.

In 1966, the abbey on Mont Saint Michel was returned to the Benedictines in a symbolic ceremony that formed part of the island's millennium celebrations. The year of 1979 saw the island and the bay in which it stands become a UNESCO World Heritage Site.