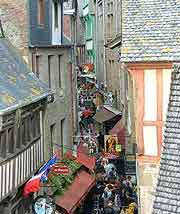 A small island and local community, Mont Saint Michel has a number of shopping opportunities, although the majority of these are really little more than tacky gift shops.

The largest selection of shops and cafes on Mont Saint Michel are to be found lining the Grande Rue, and these are fine if you are simply looking for a nice postcard, T-shirt or souvenir.

If the shopping scene on the island is too limited for your needs, then a further selection of shops and supermarkets are to be found on the approach road, which leads to Mont Saint Michel's causeway. Although these shops are quite expensive, they are conveniently placed with parking, and generally cheaper than their equivalent counterparts. 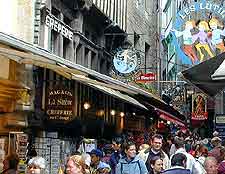 There is a handy supermarket located opposite the Hotel Mercure on the causeway, which is always popular with those who are self catering.