Getting Around, Leipzig Travel, Transport and Car Rental

Although much of Leipzig is easy to travel around on foot, a good choice of public transport is on hand should you require it. Trams are especially popular and provide an inexpensive way to travel around much of central Leipzig, being heavily used by locals.

Those arriving by air will most likely fly into the nearby Leipzig Halle Airport (LEJ), while for those who choose to travel by train, Leipzig's Hauptbahnhof (Main Train Station) is enormous and hard to miss. Worth noting, do consider purchasing the Leipzig Card, which provides free travel on the city's public transport network.

Address: Leipzig, Saxony, Germany
Tel: +49 341 224 1155
A major transport hub in the Saxony area of Germany, Leipzig Halle Airport (LEJ) stands around 18 km / 11 miles to the north-west of the city and each year serves more than two million travellers. Regular flights travel both to and from many prominent German cities, together with other top European destinations, such as Paris, Fuerteventura and also London Stansted. The main airlines include Delta, Eurowings and Lufthansa. A good choice of ground transportation is available at Leipzig Airport, including an hourly intercity train and buses, which travel into the city every 30 minutes.

Leipzig is located on the southern side of the nearby A14 Halle-Dresden autobahn, which provides a fast way to travel into the city. Also nearby is the A9, which stands around 15 km / 9 miles east of Leipzig and connects both Nuremberg and Berlin. Car hire is available at the airport's many transport rental companies and those choosing to drive within the city itself should use the metered parking lots, which surround the historic Altstadt district. 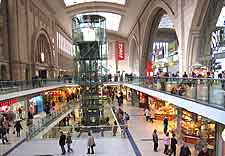 The Hauptbahnhof stands on the north-eastern side of the Ring Road, known locally as simply the 'Ring' and encompassing the Old Town district. A smaller, secondary train station, the Bayerischer Bahnhof, lies to the south. Train transport in Leipzig, known as the S-Bahn, is well used by both tourists and locals alike, offering a fast way to travel to Berlin (one hour and 30 minutes), Dresden (just over one hour), Frankfurt (just over three hours), Hanover (three hours) and Hamburg (just over four hours). 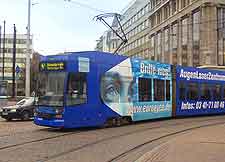 You will find the city's bus station on the eastern side of Old Town Leipzig and whilst city buses are available, many people prefer to use the trams, which are one of the main modes of public transport. The major tram lines travel past Willy-Brandt-Platz, next to the Hauptbahnhof.

Much of the taxi transport in Leipzig is provided by two firms, Funktaxi and also Lowen Taxis, with rates charged per kilometre. At night, both bus and tram drivers will be happy to arrange for a taxi to pick you up at your relevant stop.