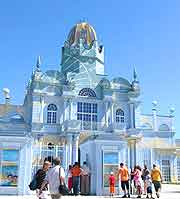 The perfect base for exploration of this part of Saxony, many attractions are close to Leipzig and include the World Heritage Site of Wörlitz Park, the appealing town of Dessau, and the WWII Escape Museum at Colditz.

For others, the thrills and exciting attractions at the nearby Belantis Amusement Park are just the ticket.

Also close to Leipzig, consider visiting the many sights around the Saale Valley, the cities of Delitzsch and Merseburg, and the annual wine festival at the town of Freyburg, which is held each year in the middle of September.

Appealing attractions nearby Leipzig are shown below. 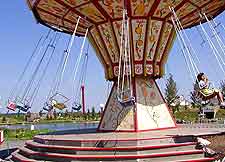 Lying on the southerly outskirts of Leipzig and surrounded by a series of lakes, the Belantis Amusement Park is full of family attractions. Covering around 62 acres / 25 hectares, Belantis Amusement Park is split into separated themed areas, each of which has its own set of fast rides and roller coasters, such as the 'Knights Castle' and also the Egyptian 'Land of the Pharaohs'. A number of eateries and gift shops complete the main attractions.
Open hours: daily - seasonal variations
Admission: charge, discounts available for children and disabled visitors, children under 1 metre tall, blind people and wheelchair users go free 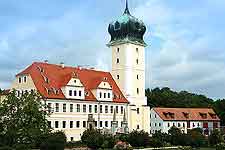 Located roughly 24 km / 15 miles north of Leipzig, the city of Delitzsch has a population of approximately 30,000 people. The many attractions of Delitzsch include its medieval district, historic castle, restored city wall and famous chocolate factory. 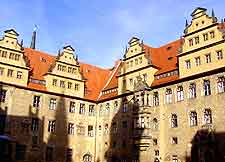 The city of Merseburg features a population of just 35,000 and lies around 45 km / 28 miles to the west of Leipzig. Sited within the district of Merseburg-Querfurt, of which it is the capital, Merseburg's striking palace and cathedral are amongst the main attractions. Founded at the beginning of the 11th century, the St. John the Baptist Cathedral is particularly attractive, while the 15th-century Episcopal Palace is known for its striking towers, beautifully landscaped gardens and various festivals, such as the Merseburg Palace Festival and Historical Pageant, and Palace Concerts. 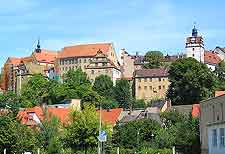 Around 46 km / 29 miles south-east of Leipzig city centre, Colditz is a small, sleepy town, and yet well-known for its beautiful castle. Colditz has also been the subject of almost 100 books and a major BBC television series about prisoners of WWII. The Colditz Escape Museum is not to be missed and remembers the many escape attempts from the prisoners of war held at the castle between 1939 and 1945, of which there were more than 300.
Open hours: April to October, daily - 10:00 to 17:00; November to March, daily - 10:00 to 16:00
Admission: charge, discounts available to disabled visitors and children 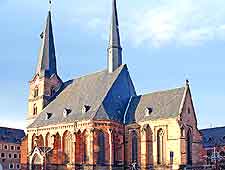 Situated around a one-hour drive directly south of Leipzig, Zwickau is a large city and home to more than 100,000 inhabitants. Many of the best attractions and sights stand within the historic Altstadt quarter and around the Hauptmarkt area. Highlights include the Schumann monument, the Automobilmuseum (Car Museum) and also a number of theatres, such as the Theater Zwickau, the Kleine Bühne Puppentheater (Puppet Theatre), and the Theater in der Mühle.