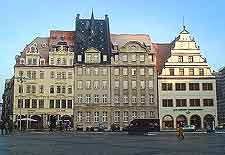 The German city of Leipzig comprises five main zones or districts, with many of the best sightseeing to be found around the historic Old Town district, within Leipzig city centre itself. Other areas of interest surround this district and are home to shopping centres, museums, gardens, churches, hotels and the city zoo.

Many people enjoy Leipzig's historic centre walking tour, which is around 4 km / 2.5 miles in length and starts at the Market Place (Marktplatz). Along the tour, you will pass many local sights, including the Augustusplatz, Könighaus and Mädler Passages, Naschmarkt (snack market), 12th-century Nikolaikirche (St. Nicholas Church) and the Theaterpassage. 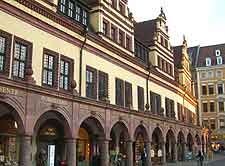 Old Town Leipzig is located in the very heart of the city and is home to many of the most noteworthy buildings. The restored Old Town Hall (Rathaus) is especially notable and lies within the Market Place, being surrounded by many coffee shops and bars, which often spill out onto the pavements. One of the best ways to familiarise yourself with this part of Leipzig is to walk around the district, much of which is well pedestrianised. Particularly appealing is the plentiful Baroque-style architecture lining the Katharinenstrasse, while also of interest are the nearby historic churches, the many museums and cultural attractions, and the University of Leipzig and its towering architecture. 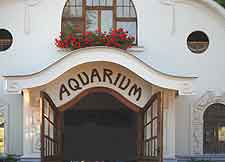 Northern Leipzig offers a rather diverse selection of sightseeing, ranging from old timbered buildings and houses, to contrasting grand structures, none of which is more impressive than the magnificent palace of Gohliser Schlösschen. Built in the mid-18th century, this imposing building is located along Heinrich Mann Road and regularly hosts local concerts and other enjoyable events. Also popular and offering bags of tourist appeal, Leipzig Zoo (Zoologischer Garten) is situated along Pfaffendorfer Strasse and a great place for all the family, where animals range from lions and elephants, to reptiles and colourful fish.

Leipzig's easterly districts are famed for their publishing past and many of the local streets are named accordingly, remembering their literary heritage. Those with an interest in gardening and horticultural will enjoy a visit to the Leipzig Botanical Gardens (Botanischer Gartens) on Linnestrasse, which features free admission and dates back to the mid-16th century. The historic Bayrische Bahnhof train station is also located here. 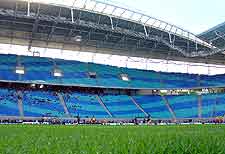 The western districts are home to a large concentration of industrial parks and local companies. However, tourists visiting Leipzig may come here for a stroll around Clara Zetkin Park, to enjoy the horse-racing at the Scheibenholz, or to join the crowds at one of the regular sporting events at the vast Sportstadion (sports stadium).

Southern Leipzig is where you will find the acclaimed German Museum of Books and Writing, which stands on the Deutscher Platz and is known locally as the Deutsches Buch und Schriftmuseum. Other significant attractions include the city's Old Exhibition Centre (Alte Messe), where the Leipzig Trade Fair was previously held before moving to the new fairground building in the 1990s. Much of Leipzig's southern area is dominated by the Völkerschlachtdenkmal, the largest war memorial in the whole of Europe.